One of my friends who has recently moved to Australia from Britain was wondering why I had a -10C° rated sleeping bag in Australia, she said there’s “something wrong with that picture…”

She had made a common mistake in not realising that in the desert, night time temperatures can be cold at any time of year. During the Australian winter months from late May through to early August, the evenings can be very cold (down to minus 5C° / 24F°) in the outback/desert areas.

The photo below shows me getting into a swag to sleep at night in the Central Australian desert area in the middle of winter. I was wearing at least 6 layers of clothes + beanie on my head and gloves on my hands. On top of that I was inside my -10C rated sleeping bag inside a canvas swag. But I was still cold – really cold – cold enough that it was almost painful. 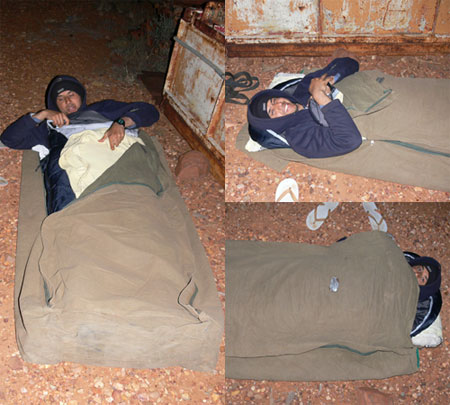 The very dry air of the desert holds little moisture and thus holds little heat so as soon as the sun sets, the desert cools considerably. Clear, cloudless skies also help to quickly release heat at night. Most deserts have very low temperatures at night

Sand (of which deserts have plenty) has low specific heat capacity and it is easy for sand to change its temperature – desert sand warms quickly in the morning sun and cools quickly at night.

It is best to dress in layers, adding as the temperature drops during the evening. Sleeping in jeans is a bad idea as they don’t retain heat, fleecy pants are much warmer.

6 thoughts on “Colder Than You Expect: Sleeping in a Swag in the Australian Outback Desert”