28 km north of Lyndhurst is the ghost town of Farina, now nothing more than a fascinating collection of ruins with the surrounding countryside littered with old drays, wheels and rusting pieces of equipment. 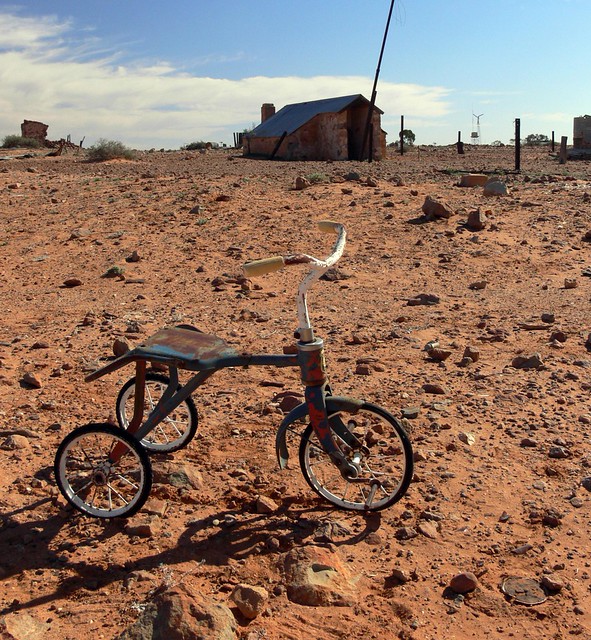 It is strange, while wandering around the ruins, to think that people once made their homes here and hoped to grow wheat in the parched surrounding landscape.

The area was originally proclaimed a town on 21/03/1878 and called “Government Gums” because of the mature River Red Gums in the creek to the north of the town.

Later it’s name was changed to “Farina” (Latin for wheat or flour) by farmers who optimistically hoped to turn the vast flat lands here into fields of grain.

For a few years the rains were unusually good, and the farms and town flourished, reaching a population of about 600 before the copper and silver mine closed in 1927.

At its peak the town had a bakery, grain store, two breweries, two hotels, a general store, post office, Anglican church, five blacksmiths and a school. 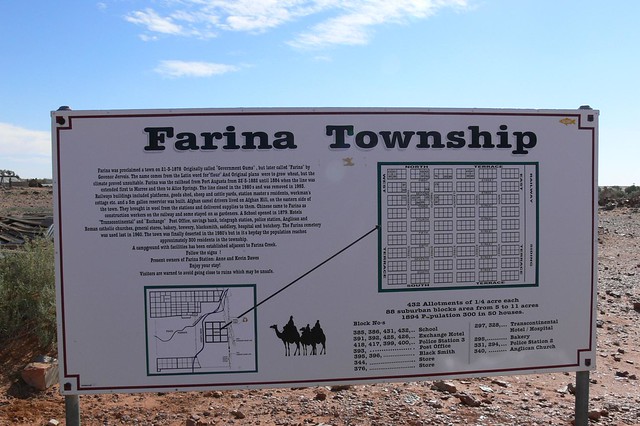 Then the normal climate returned … bringing years of drought and dust storms which eventually forcing the abandonment of the town. 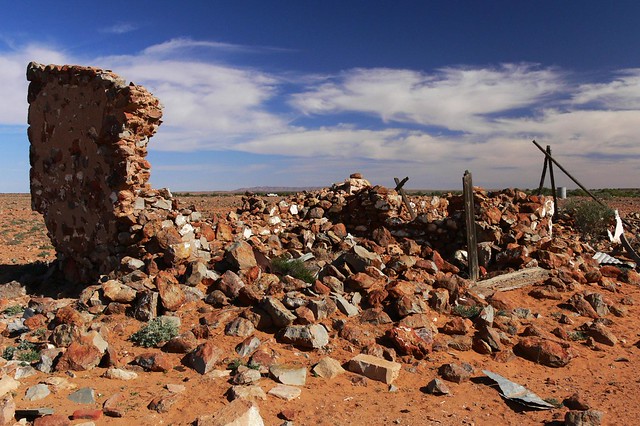 One of the more unusual cargoes embarked at Farina railway station was South Australia’s biggest meteorite. The 1.2 ton Murnpeowie iron Meteorite was dragged out of the desert north-east of here about a century ago; and can be seen today at the South Australian Museum in Adelaide.

Afghan camel drivers lived on Afghan hill, on the eastern side of the town. They brought in wool from the stations and delivered supplies to them. Chinese came to Farina as construction workers on the railway and some stayed on as gardeners.

The Farina cometary was last used in 1960 and the town was finally abandoned in the 1980’s.

A bush camp ground with facilities has been established adjacent to Farina creek by the owners of Farina station.

Lyndhurst is located 606 km north of Adelaide at the crossroads of the Strzelecki and Oodnadatta Tracks. For more information contact the South Australian Visitor & Travel Centre