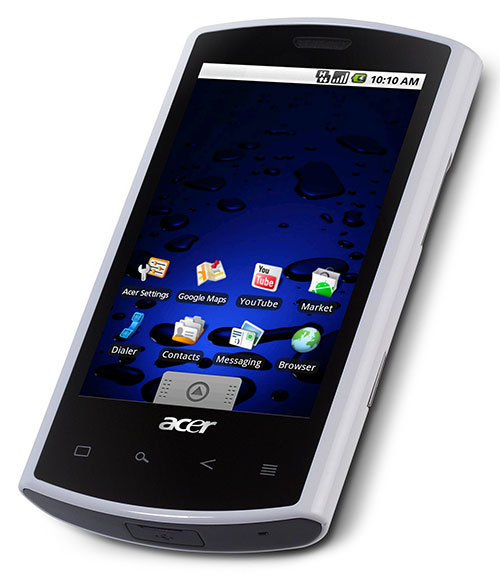 Comparison to Other Android Phones

Note: thanks to Australian online store Mobicity for lending me the Acer Liquid A1 Android smartphone. At time of writing they had it on sale for $519 including an Australian 12 month warranty.

You can find out more about the Liquid’s features at ACER’s website. If you’re an advanced smartphone user and want to get administrator (root access) to the Acer Liquid so you can upgrade it yourself visit Modaco Forums

Other People’s Reviews of Acer Liquid A1 Android Phone

Similarly to Acer´s latest Windows phones, the Liquid A1 comes with capable hardware that, sadly, is not exactly backed up by elaborate interface personalization, but the difference to Windows Mobile is that Android tends to be more user-friendly barefooted.

Handsets like the HTC Hero and Motorola MILESTONE/DROID are clearly superior in terms of software. Still, if you happen to be on the lookout for a powerful smartphone and interface personalization is not your cup of tea, consider the Acer Liquid A1. It is a good option and you don’t need to break the bank to get one, because its retail price is lower than the amount you have to fork out for one of the afore-mentioned devices
– PhoneArena

Overall the Acer Liquid is an interesting addition to the Android portfolio. It gets some things really right: the screen is a good size and resolution and responsive enough and the essentials are covered: HSDPA, GPS, Wi-Fi, Bluetooth. For those looking for an Android device that hasn’t been tinkered with too much, then this might be worth investigating, but beware what looks like some minor software bugs.
– Pocket Lint