I recently visited Darwin, the capital city of Australia’s Northern Territory during the Buildup season in late October as a guest of Tourism NT, along with several other journalists. I’ve visited Darwin before on holiday so was able to plan ahead and decided that I wanted to focus my photography on the outdoor markets and wildlife. As with all trips I go on, I have total control over deciding what and how much I write about and photograph of the places I visit.

By coincidence I was just reading ABC News online and saw a story that announced “The travellers’ guidebook Lonely Planet has named Darwin as one of the top 10 places in the world to visit in 2012.”

Well known ABC cricket commentator Kerry O’Keefe sometimes mentions that in his view the easiest job in the world is the Darwin weather forecaster. You don’t have to get out of bed its 32°, 32°, and 32°!. The only difference is whether it’s dry or wet.

In reality while it’s true that during the day a temperature of 30C +-5 is common in Darwin there are actually 6 seasons: Monsoon, Knock em Down, Cooler but humid, Cold, Hot dry and Pre-monsoon (Buildup). Temperatures and weather patterns in the Northern Territory have become more unpredictable than usual, possibly due to the effects of global warming/climate change. Keeping cool and hydrated is serious business in the Top End. If you walked a few kilometres without a hat or water you would quickly get dehydrated and dizzy. Mindil Beach markets are open for the more calm 3 seasons of the year – from the last Thursday in April until the last Thursday in October each year. They open Thurs 5-10pm and Sat 4pm-9pm and stalls offer a wide range of food, arts and crafts. Since they’re located next to the beach you can buy a cool drink or dinner and sit on the sand watching the blood red Sun set over the Timor Sea. The only newspaper in the Northern Territory is the NT News and it is famous for regularly featuring Crocodiles on the front cover. I say why not? They certainly make for attention grabbing front pages. I’ve taken several photos of crocodiles in the Northern Territory during previous holidays, you can see examples of these photos below: (Featured as Photo of the Week on Qantas Travel Insider)

During this trip I got to visit the relatively new Crocosaurus Cove where we got to see a variety of crocodiles and reptiles. I tested some underwater cameras for an article in GEARE magazine by swimming in a tank in a croc tank with a glass wall separating me from them. The Northern Territory as a whole is in my opinion the best place to visit if you want to see many raptor (predator) birds. Hawks, falcons and eagles can be seen quite often, especially hovering over main highways waiting to eat roadkill.

This 48 hour trip was far too short to do any serious bird watching but my local NT photojournalist friend Bob Gosford drove me around for 2 hours and we managed to spot 2 Whistling Kites fighting for food scraps and some Terns. Later on I found a dead Rainbow Lorikeet which was sad but enabled me to take macro (closeup) photos of its feathers which show an interesting green pattern. Parap Village Markets run all year round every Saturday of the year between 8am and 2pm. I visited at breakfast time and found it had a very Asian smell and feel to it, with lots of stalls selling all kinds of food and drink as well as beautiful flowers. You shouldn’t swim in the sea around Darwin during October to May as box jellyfish “stingers” are common. Saltwater crocodiles are also very common in all waterways surrounding Darwin and are even occasionally found swimming in Darwin Harbour and on local beaches.

Tourism NT suggests that tourists take advantage of the Wave Lagoon (fee for use) and/or the Recreation Lagoon (free) which should be stinging jellyfish free and much safer to swim in than the open sea because it has mesh screens and nets to keep “stinger” jellyfish out.

Both Lagoons are handily located alongside the Vibe Hotel Darwin Waterfront where Tourism NT had booked our group in to stay. They are literally less than a minutes walk from the hotel’s breakfast cafe area.

Darwin has more lightning strikes than any other city in the world, especially during October/November/November during the Buildup to the Monsoon. This attracts storm chasers and photographers from around Australia and the world to visit and marvel at the power of nature.

I was lucky enough to watch a massive storm on the horizon from the Deckchair Cinema area with so many simultaneous lightning strikes that the photo looks like it was taken during the day, rather than late in the evening as it actually was. The Vibe Hotel Darwin Waterfront hotel I stayed at is located on the shore and offers “Stormchaser” packages in the wet season for photographers. As you can see in the photo below taken by one of the hotel staff you can’t get much closer to the storm action!

Some of my highlights photos have been displayed in this article but you can view all of them here or in a slideshow below: 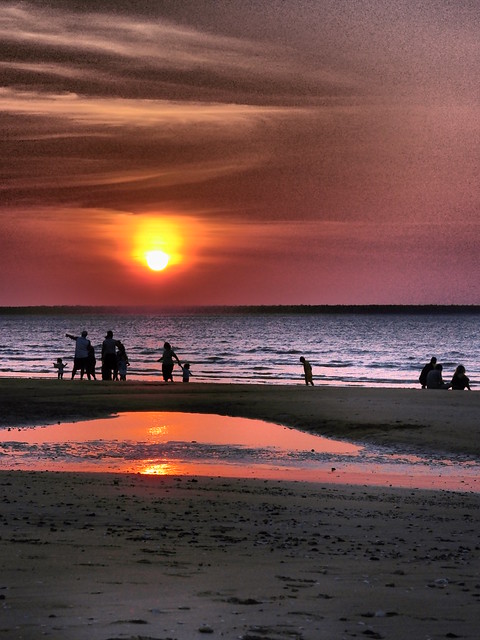 DISCLAIMER: Almost all expenses for this trip were covered by Tourism NT (Tourism Northern Territory), and accomodation by Vibe Hotel Darwin Waterfront. I have full editorial control over the topics I want to write about on this trip and what I say.