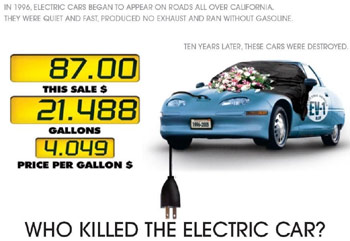 What would you say if I told you that General Motors (GM) created an electric car for the Californian market that was easy to use, looked great and was so efficient that it made the Toyota Prius look like a petrol guzzler … and then repossessed all the cars from owners who loved them … and had them crushed to prevent anyone else finding out about them.

This is a true story told in the 2006 documentary film “Who Killed the Electric Car” narrated by Martin Sheen which explores the birth, limited commercialization, and subsequent death of the battery electric vehicle in the United States, specifically the General Motors EV1 of the 1990s. The film explores the roles of automobile manufacturers, the oil industry, the US government, batteries, hydrogen vehicles, and consumers in limiting the development and adoption of this technology.

It was among the fastest, most efficient production cars ever built. It ran on electricity, produced no emissions and catapulted American technology to the forefront of the automotive industry. The lucky few who drove it never wanted to give it up. So why did General Motors crush its fleet of EV1 electric vehicles in the Arizona desert?

The year is 1990. California is in a pollution crisis. Smog threatens public health. Desperate for a solution, the California Air Resources Board (CARB) targets the source of its problem: auto exhaust. Inspired by a recent announcement from General Motors about an electric vehicle prototype, the Zero Emissions Mandate (ZEV) is born. It required 2% of new vehicles sold in California to be emission-free by 1998, 10% by 2003. It is the most radical smog-fighting mandate

With a jump on the competition thanks to its speed-record-breaking electric concept car, GM launches its EV1 electric vehicle in 1996. It was a revolutionary modern car, requiring no gas, no oil changes, no mufflers, and rare brake maintenance (a billion-dollar industry unto itself). A typical maintenance checkup for the EV1 consisted of replenishing the windshield washer fluid and a tire rotation. But the fanfare surrounding the EV1’s launch disappeared and the cars followed. Was it lack of consumer demand as car makers claimed, or were other persuasive forces at work?

Fast forward to 6 years later… The fleet is gone. EV charging stations dot the California landscape like tombstones, collecting dust and spider webs. How could this happen? Did anyone bother to examine the evidence? Yes, in fact, someone did. And it was murder.

Watch the trailer (below) and if you like what you see, make sure you rent or buy a copy of Who Killed the Electric Car to watch for yourself.

6 Replies to “Who Killed the Electric Car (Movie Review)”