In the evolution of phones that I’ve owned, Nokia 1600 is like walking, Nokia 6300 is like a horse and carriage and the HTC Dream is like jumping straight to the jet age. The HTC Dream (known as T-Mobile G1 in the USA) is often compared directly with the iPhone but I think that’s silly because they appeal to completely different markets. 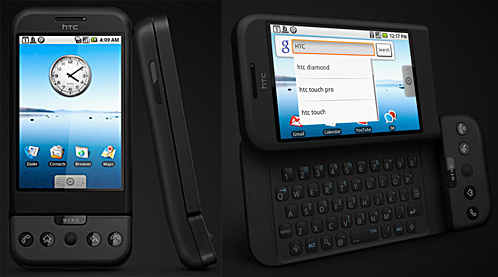 The HTC Dream when coupled with a Seidio Innocell 2600 Extended Life Battery is like an ugly all terrain vehicle with a rough interface and extended range fuel tank whereas the Apple iPhone is like an electric car which is popular, looks beautiful but has some shortcomings like a low range, sealed non-replaceable battery.

Reasons Why I Bought HTC Dream Instead of iPhone

Unfortunately Australian buyers of the HTC Dream are currently being sold an older version of the phones software than is available to buyers in the UK and USA. I spoke to my PR contacts at HTC and Optus as well as other contacts in the mobile phone industry and couldn’t get the same answer twice which is very frustrating.

Some of them said people who bought the HTC Dream and are using it on the Optus network will get the updates sent to their phone over the network and it will be updated automatically. They weren’t sure whether this applied to people using the HTC Dream with Virgin Mobile which uses Optus phone towers but is run as a separate company.

Either way no one was able to confirm how soon updates would be available with estimates ranging from a few weeks after the USA to several months!! Meanwhile Australian buyers are frustrated at not being able to use new features released in the USA like video recording.

EDITOR: what happened was that everyone who bought an HTC Dream in Australia from an Optus dealer got the 44MB update file sent to their phone directly in early August 2009 regardless of which SIM they were using: Virgin Mobile, 3 Mobile, Optus etc. For Optus users it didnt count towards data cap usage. For other carriers it did count

Follow the instructions below to manually update your Optus HTC Dream.

Buying the HTC Dream in Australia

However there are other options. Most phone stores selling Optus or HTC will sell the HTC Dream to you outright without a contract for $850-$899 (that’s what I did). This includes a proper warranty with HTC Australia and the phone is unlocked so you can use it on any phone network.

An option for technically savvy people who don’t mind getting no warranty is to buy the HTC Developer phone from Google USA for $US399 + shipping.

You will have to manually add settings for your phone network and realise that the Developer phone software is not exactly the same as the retail version. On one hand you are free to re-image the phone easily to use 3rd party firmware but on the other hand you’ll get no support from HTC Australia if you have any hardware/software issues.