Looking for a quick and easy way to reduce your tax bill?

Australian tax payers can reduce the amount of tax they owe by giving a gift of more than $2 to an approved charity (deductible gift recipient). There is no upper limit on the amount of donations you can claim a tax deduction for – but you can’t use a large donation to create a tax loss. 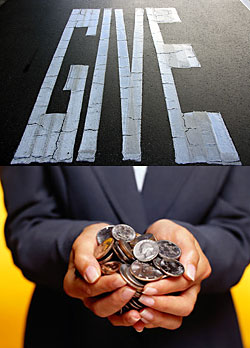 Charitable donations have to be received by the charity by the end of June 30th to be counted in that years Tax Return so don’t leave your donation until July or August! Also make sure you comply with the ATO rules for charitable giving

Studies regularly show that people who donate money to charity feel much better about giving it away than if they had bought something for themselves with the same amount of money.

You can claim a full tax deduction for gifts of money $2 and over to approved deductible gift recipient charities – there is no upper limit.

If you donate money and receive goods or services in return, you can’t claim a tax deduction. For example if you get a chocolate bar, ticket to a charity dinner etc.

Do make sure you get an official receipt for your donation. It may not seem worth asking the Red Cross volunteer collector for a receipt for $5 but small frequent donations add up.

Giving Shares or Property to Charity

You may not be aware of this but if you give money to someone collecting for charity on the side walk, in a shopping mall stall or after clicking on an internet advertisement then most of your donated money could be paid to an advertising agency or commercial profit motived fund raising company as a commission.

The best way to ensure that all your money goes straight to the charity is to donate to them by credit card by calling their phone number or directly typing their website address into your internet browser and paying by credit card online.

Know where your money is going. Make sure your money is going right to the charity, and not through a middle man. Reputable charities have an expense breakdown, so you see how money is divided within the organisation. A good charity should spend at least 70-80% of donations on charitable activities and the rest on staff, expenses and advertising.

Choose the Charity you Donate to Wisely

I think that it’s better to give all your charitable donation money to one charity and make a big impact rather than giving small amounts to many different charities.

Pick one charity and give to it each year. Thousands of charities are out there. Are you passionate about fighting breast cancer? Look for a local cancer charity. Want to help the homeless? Give to a soup kitchen. Pick a cause that means something to you and stick with donating to that cause.

Check credentials. It’s easy to donate to big well known charities like the Red Cross or UNICEF and be confident that your money is going where it should.

However if you choose to donate to a smaller charity make sure it’s a registered deductible gift recipient Australian charity by going to www.abn.business.gov.au. Enter the charity’s Australian business number (ABN) or Charity Name in the search box. Scroll down to “Deductible Gift Recipient”. If the organisation is a DGR it will be displayed on screen.

I choose to make my yearly charitable donation to the conservation charity Bush Heritage Australia: protecting land, water and wildlife as well as cultural heritage, for the future of all Australians.

View the Australian Tax Office website fact sheet about Making tax deductible donations, call the personal tax enquiries hotline on 13 28 61 or speak to your accountant for more details and personalised advice about donating to charity.