Although Kyoto is Japan’s 7th largest city, it’s the 2nd most popular with tourists after Tokyo because of it’s many temples as well as it’s history as Japan’s capital and Emperor’s resident city for over 1000 years from 794 until 1868. Thanks to it’s strong Buddhist tradition Kyoto is also the easiest place in Japan for Vegetarians and Vegans to eat. Ask for “Shojin Ryori”. 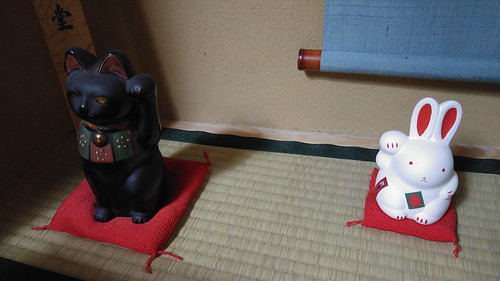 According to Japan Guide: over the centuries, Kyoto was destroyed by many wars and fires, but due to its historic value, the city was dropped from the list of target cities for the atomic bomb and spared from air raids during World War II. Countless temples, shrines and other historically priceless structures survive in the city today. 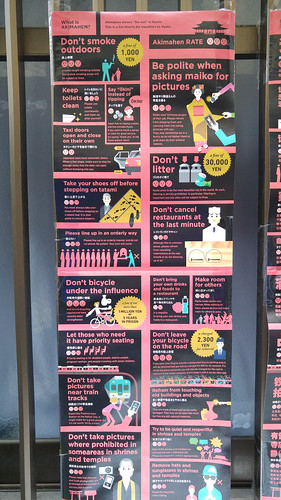 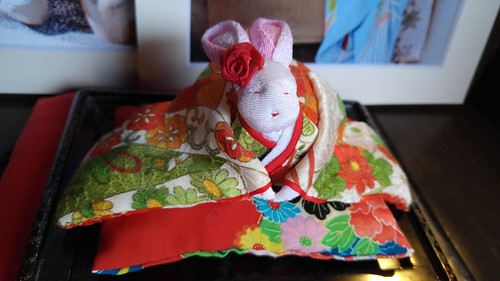 Where to Stay & What To Do in Kyoto

While visiting Kyoto we stayed in a Japanese style Ryoken room at Maifuken hotel in the Gion area. It was good but expensive.

The staff were very friendly, the room was spacious and the Internet was fast. This was handy because one day it rained heavily so we stayed in our room for a few hours watching Netflix on the room’s Apple TV (you need your own Netflix login). 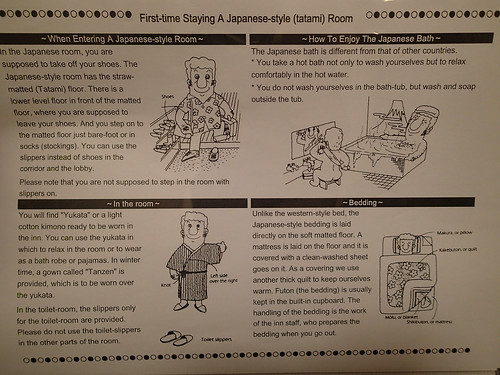 According to Japan Guide: Gion (祇園) is Kyoto’s most famous geisha district, located around Shijo Avenue between Yasaka Shrine in the east and the Kamo River in the west. It is filled with shops, restaurants and ochaya (teahouses), where geiko (Kyoto dialect for geisha) and maiko (geiko apprentices) entertain. 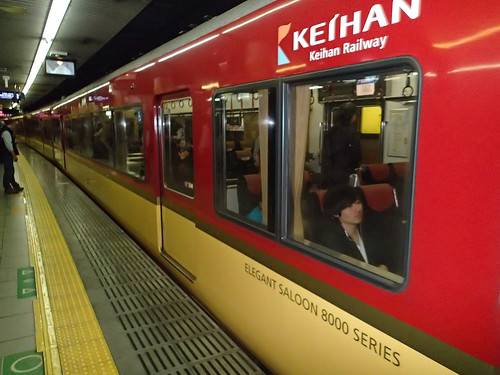 Our must see for Kyoto was the Tori gates at Fushimi Inari-taisha. We got there via a trip to South Kyoto on Keihan Railways to Keihan Fushimi Inari train station. 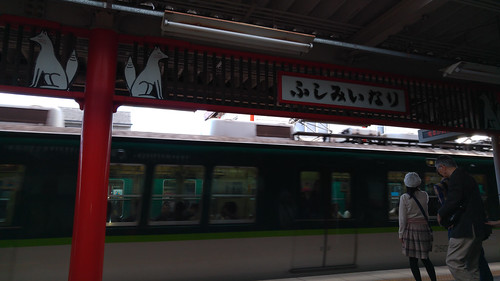 According to Japan Guide: Fushimi Inari Shrine (伏見稲荷大社, Fushimi Inari Taisha) is an important Shinto shrine in southern Kyoto. It is famous for its thousands of vermilion torii gates, which straddle a network of trails behind its main buildings. The trails lead into the wooded forest of the sacred Mount Inari, which stands at 233 meters and belongs to the shrine grounds.

Fushimi Inari is the most important of several thousands of shrines dedicated to Inari, the Shinto god of rice. Foxes are thought to be Inari’s messengers, resulting in many fox statues across the shrine grounds. Fushimi Inari Shrine has ancient origins, predating the capital’s move to Kyoto in 794. 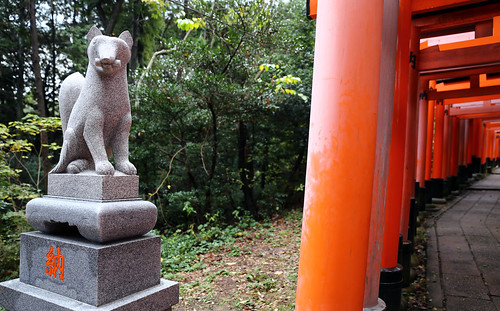 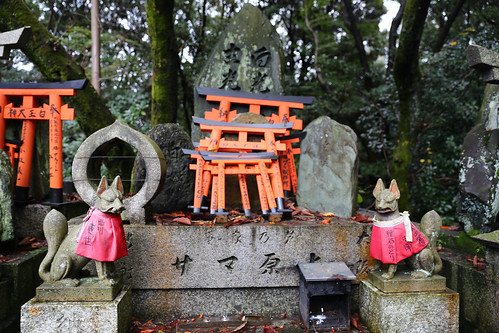 We walked up to the shrine summit, the red Tori gates looked much nicer near the top as hordes of tourists had given up & walked back beforehand. Part way up you can see a view of the city skyline. 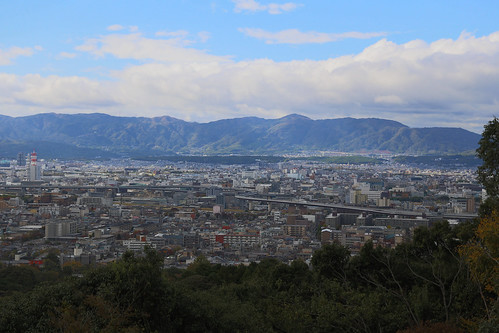 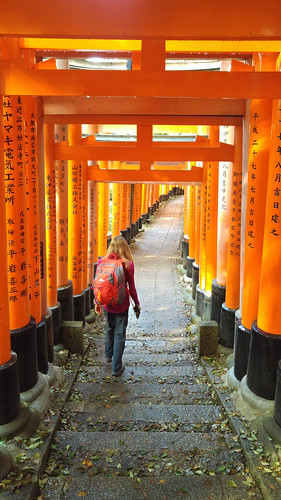 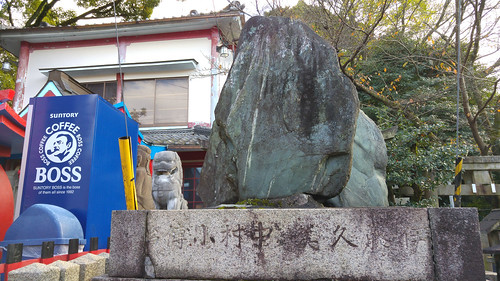 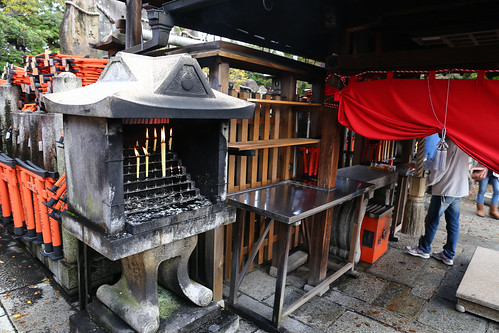 Kyoto has so many temples you couldn’t possibly visit them all. We chose to explore Sanjūsangen-dō the Buddhist temple for Kannon, the goddess of mercy. One of the best parts of the temple was a large gold statue surrounded by over a 1000 others. The different exhibits had good English explanations. 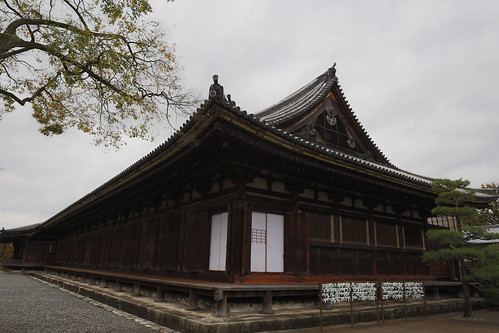 What to Eat in Kyoto

As I mentioned previously Vegetarians should find plenty of places to eat in Kyoto.

My wife and I both enjoyed a delightful set lunch at Organic House Salute, a hidden away proper Japanese restaurant near Kyoto station. I wasn’t sure which cake to choose, so I chose both. 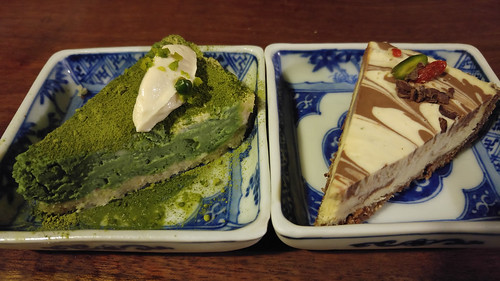 Since Maifuken hotel’s partner restaurant was quite expensive for breakfast, we sought it elsewhere. Japan isn’t a early breakfast eat out culture, we were still the first people at CHOICE cafe and restaurant 45min after it opened for breakfast. 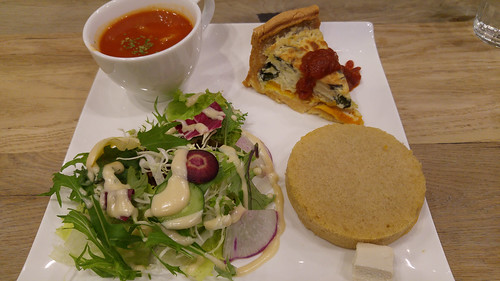 After visiting the Tori gates we walked to Vegans cafe and restaurant for a late lunch.

I tried soy cheese pizza for the first time, not something I’d eat if I wasn’t keen for Western(ish) vegetarian food, which Japan lacks. My wife’s soy meat with brown rice was much nicer. 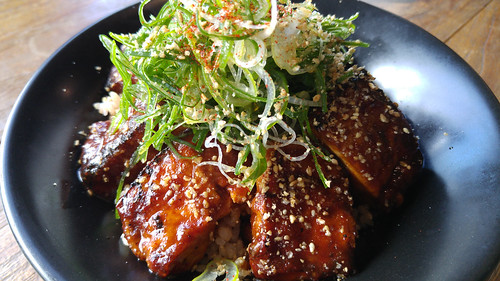 A visit to Nishiki Market in central Kyoto is well worth it. According to Japan Guide (錦市場, Nishiki Ichiba) is a narrow, five block long shopping street lined by more than one hundred shops and restaurants. Known as “Kyoto’s Kitchen”, this lively retail market specializes in all things food related, like fresh seafood, produce, knives and cookware, and is a great place to find seasonal foods and Kyoto specialties, such as Japanese sweets, pickles, dried seafood and sushi.

Nishiki Market has a pleasant but busy atmosphere that is inviting to those who want to explore the variety of culinary delights that Kyoto is famous for. The stores found throughout the market range in size from small narrow stalls to larger two story shops. Most specialize in a particular type of food, and almost everything sold at the market is locally produced and procured.