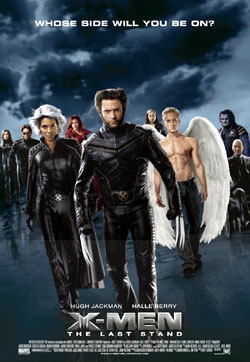 I watched X-Men 3: The Last Stand just after it was released. As a fan of the X-Men comics, who has watched the previous 2 movies and the animated TV series X-Men Evolution I was hoping for more of the same … but was worried about the change in directors with Brett Ratner replacing Bryan Singer.

Unfortunately my fears were realised as Ratner served up a movie littered with special effects, but devoid of character development or a cohesive plot. To make it worse, the movies pace was far to fast, and too much time was wasted introducing dozens of new mutant characters such as Juggernaut (Vinnie Jones) whose acting skills are as subtle as a brick thrown through a window.

The end even made a mockery of the film’s title The Last Stand with none too subtle hints after the credits finished rolling that a sequal or spinoff is in the making.

The critical consensus from Rotten Tomatoes backs my conclusions up:

“Director Brett Ratner has replaced the heart and emotion (and character development) of the previous X-Men films with more action and explosions. The film should still provide ample entertainment, but viewers may truly wish this to be the Last Stand.”

In X-MEN: THE LAST STAND, the final chapter in the “X-Men” motion picture trilogy, a “cure” for mutancy threatens to alter the course of history. For the first time, mutants have a choice: retain their uniqueness, though it isolates and alienates them, or give up their powers and become human.

The opposing viewpoints of mutant leaders Charles Xavier, who preaches tolerance, and Magneto, who believes in the survival of the fittest, are put to the ultimate test – triggering the war to end all wars.
– Marketing synopsis © 20th Century Fox