You may be wondering whether you should buy Windows 7 after its launch in late October 2009. Luckily for you I’ve been testing it for several months on my own Kogan Netbook Pro and 2 media loan laptops: the mid-level Lenovo X200 and high end Dell Studio 17 series 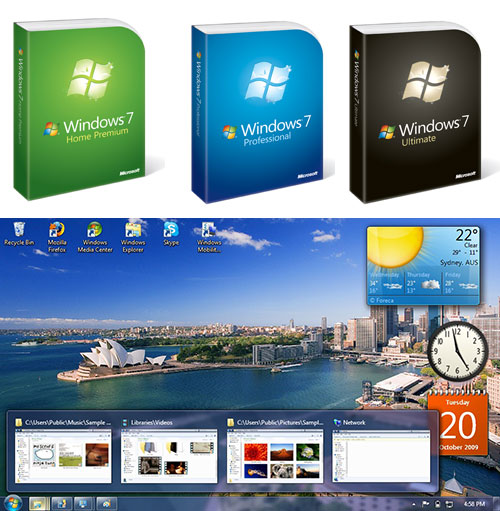 Note: the initial RC 7100 version of Windows 7 that I tested was publicly available to everyone. The rest of my review is based on a copy of Windows 7 Ultimate which was given to most/all Australian technology media/journalists.

What Other Windows 7 Testers Think

Put simply, Windows 7 is greater than the sum of its parts. And while no software is perfect, Windows 7 is the right product at the right time. It is an astonishing accomplishment, even more so when you compare it to its direct predecessor, Windows Vista, which was (and still is) a fine product, sure. But Vista was also the wrong product at the wrong time, a victim both of Microsoft’s mistakes and a lack of acceptance in the marketplace.
– Paul Thurrott (Windows Supersite)

Luckily for Microsoft, Windows 7 is more than just spin. It’s stable, smooth and highly polished, introducing new graphical features, a new taskbar that can compete handily with the Mac OS X dock, and device management and security enhancements that make it both easier to use and safer. Importantly, it won’t require the hardware upgrades that Vista demanded, partially because the hardware has caught up, and partially because Microsoft has gone to great lengths to make Windows 7 accessible to as many people as possible.
– Seth Rosenblatt (CNET)

The install process was WIN for me. All the drivers were installed after windows update. Vista required 3rd party installs etc. Wifi is easier to configure.
– Nicholas Rayner (Friend)

Suitable to older PC’s not just high spec new ones – and runs well on them. Windows Media Centre – Excellent stuff – I almost can’t live without it now. Usability – it’s just easier to use, to customise and work your way around. Pop Ups – Not so annoying and controllable. for the record, I’ll be purchasing several copies of win7 in the next year for my pc’s.
– Trevor Long (Friend)

From a personal perspective it has been usability – the small tweaks and features for power users (Aero snap, peak, shake, etc). Also networking and media sharing are so simple and easy in Win7, compared to XP and some respects even Vista (esp. file sharing). Main + over Vista would be performance. Main + over XP I’d say security & reliability.
– Ash Laws (Friend)

I can’t comment too much on the tweaks from Vista (I stuck with XP) but the phrase “everything just works” comes to mind for Windows 7.
– David Olsen (Friend)

Wiping your current version of Windows and Installing Windows 7 from scratch will always provide better results. However for the sake of convenience many people prefer to upgrade an old version of Windows to a new version by installing it on top to keep their settings & applications. Upgrading in this way to Windows 7 only works if you’re currently using Windows Vista.

If you’re using Windows XP or Windows 2000 “Migrating” using Windows Easy Transfer which will assist in migrating user data and application settings is the only option besides wiping the computer and starting afresh. You will still need to reinstall all your applications if you take the Migration option.

Installing Windows 7 was surprisingly easy. Make sure you use your fastest usb drive (with at least 2.5GB free space) if installing to a netbook/laptop without a DVD drive.

Follow these instructions to Install Windows 7 on your netbook using a USB drive. Remember to remove the USB drive when the computer reboots otherwise the installation process will start again 🙂

It took roughly 30 minutes to install Windows 7 on the laptops I tested which had an empty hard disk drive and 40 minutes for the laptop with existing Windows Vista installation which had to be wiped first.

Installing Windows 7 was much easier compared to Windows XP which required lots of drivers (video, sound, motherboard etc) to be installed manually. However on 1 laptop with a Ralink WiFi card I needed to find and download a Windows 7 driver on another computer and install it on the laptop via a USB drive to get WiFi access working.

Runs OK with just 1GB RAM and very well with 2GB RAM which is a big improvement compared to the excruciatingly slow Vista. Supports touchscreen technology if you have a touchscreen computer monitor.

Windows 7 also comes in a 64 bit version. For most people this won’t be relevent, however if you have 4GB or more RAM in your computer you’ll want to get the 64bit version because 32bit XP, Vista and Windows 7 can only use just over 3GB of RAM even if more is installed.

There aren’t any HUGE new features in Windows 7, instead Microsoft has concentrated on making the user experience faster and easier so the operating system gets out of your way and lets you finish work quickly. The main improvements and new features are listed on the Windows 7 site.

Almost all parts of the laptops tested such as sound card, video card, TV tuner etc were detected automatically by Windows 7 and worked without manual driver installation but it wasn’t perfect.

These are available as free downloads from the Microsoft website in 2 packages Windows Live Essentials and Microsoft Security Essentials but I fear most average PC users won’t be able to figure this out.

Should You Use Windows 7

9 Replies to “Windows 7 Review: Fast and Easy To Use”