Thanks to 2 Belkin UPS (Uninterruptible power supply) units none of my key electrical equipment got damaged last week when the electrical wiring in part of my home failed.

If you don’t use a UPS then you’re taking the risk that a lightning strike, power surge, electricity brownout or blackout will cause your Computer, modem, TiVo/Foxtel IQ etc to get damaged. 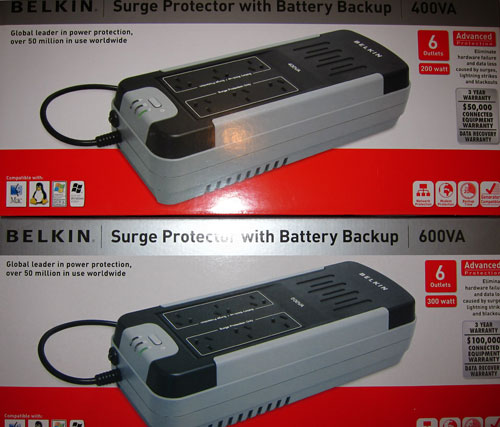 I initially got a Belkin F6S600au 600VA UPS for use in my office to protect my computer, monitor and the gadgets I recharge there including a laptop, mobile phone, video and digital cameras etc.

Note that electronic devices which draw a lot of power like laser printers and heaters should always be plugged in a surge protector socket of a UPS, never in a battery backup socket.

The F6S600auUSB 600VA has 6 power sockets which supply upto 300 Watts of power. All 6 power sockets have surge protection and 3 have battery backup as well to keep your equipment running long enough to safely shut it down in the event of a electricity brownout or blackout.

It worked well during tests like me manually turning that power circuit off at the switch so I bought the cheaper and lower capacity F6S400auUSB 400VA UPS (200 watts) to power and protect my home theatre devices (ADSL modem router, TiVO, Netgear NAS networked storage etc.)

Both the F6S600auUSB and F6S400auUSB have a built-in pass through phone line socket to protect your landline phone or ADSL modem. This worked fine with a traditional ADSL phoneline which had a PSTN dialtone and a naked ADSL line without dialtone.

During times of peak power use such as a hot day in summer, Sydney (like the other big cities in Australia), suffers from brownouts (short power outages) due to the crumbling electricity infrastructure and inefficiently designed houses and buildings which use air conditioning a lot to maintain a comfortable inside temperature.

Brownouts can be particularly damaging to electronic equipment because it is common for brownouts to occur several times at close time intervals with power going up and down.

This causes devices like Computers, NAS or PVR’s such as the TiVo and Foxtel IQ to crash due to lack of power, restart and then crash again potentially losing data in the process.

Many people run a small business from home but probably don’t realise that a home and contents insurance policy only covers lightning/power surge etc damage to your personal electrical equipment.

Any electrical device you’ve bought for your business or which is used primarily for business purposes isn’t covered for damage from a lightning strike, power surge, electricity brownout or blackout so it makes sense to self-insure by supplying these with power through a UPS.

Belkin appears to have a lot of confidence in their UPS product because they offer: