I was not surprised at all when I read in the newspaper that Jewish Australian filmmaker John Safran had been crucified in a bizarre Philippines Easter ritual. It turns out that this stunt was for his new ABC TV series “John Safran’s Race Relations” shown on ABC TV Wednesday’s at 930pm. If you’ve missed the first few episodes you can catch up by watching them on ABC iView

Some people describe Safran as the “enfant terrible” of Australian documentary making while critics say he’s “whiney, sanctimonious and a ripoff of Michael Moore”. Either way Safran is well known for using guerrilla tactics to poke fun at companies like Disney, the music industry, religions and cults like Scientology and the KKK.

Safran originally burst onto Australian TV screens on ABC TV’s “Race Around the World”, filmed 2 pilots for ABC TV including an altercation with Ray Martin from Current Affair that was never broadcast and subsequently gained fame on the popular SBS TV shows John Safran’s Music Jamboree, John Safran vs God and Speaking in Tongues

This crucifixion stunt by Safran is not the first time that he’s gained notoriety for participating in extreme religious events with his previous exploits including a Voodoo Day of the Dead ritual sacrifice in Port au Prince, Haiti, trying to make the Ku Klux Klan headquarters admit him as a member, being exorcised for demons and attempting to get a radical Muslim cleric in the UK to place a Fatwa on Rove McManus.

These were the first words on his audition tape for the ABC’s series ‘Race Around the World’ (it’s an excellent short video which has unfortunately been removed from Youtube):

But that’s enough background, the best way to understand John Safran is to see some of his work:

Music Jamboree was a satirical look at the music industry consisting of sketches and outlandish public stunts that are typical of Safran’s best work. Probably the most infamous stunt of the series was sneaking nine friends into an exclusive Melbourne nightclub by dressing them up as the masked American metal band, Slipknot. The producers arranged entry for the impostors by pretending to be an American management company over the phone.

In this clip John Safran tricks ABC TV’s Rage program into playing a music video made by a dog 🙂 :

This is a clip from the episode where John Safran does Eminem’s ‘Stan’ … Dr Seuss style. You will never see Green Eggs and Ham the same way again:

John recalls “Hipster Life in the 90’s” AKA The Rules

At the end of each episode of Music Jamboree a famous band/musician played one of their songs using a musical instrument from a different country around the world. In the clip below Ross Wilson performs Eagle Rock using the “Balophone” from West Africa: 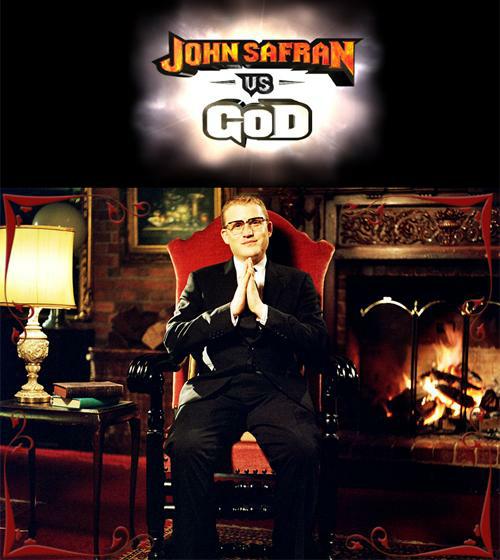 In Episode 1, John decides to find out how difficult is it to get a fatwa placed on someone. He travels to the UK Shariah court to find out and chooses an unlikely Australian rival (Rove) as his proposed fatwa-ee. Next John takes a spirit walk in Arizona with the Peyote Way Church of God, and ingests the sacred Peyote drug in an attempt at divine insights into the universe. He also muses about what the most commonly shown programs on Channel 9 would be if Jamie Packer was a practicing Scientologist?

In this clip John turns the tables on Mormans by conducting a door to door Atheist evangelical campaign in a Mormon community 🙂:

Fans of John Safran can buy some of his DVD’s from Chaos.com.