When not writing film scores, composing or being patron of several youth orchestras, James Morrison relaxes in some fairly unconventional ways for a musician – competing in triathlons, abseiling, flying his private plane or driving in a rally championship. His love of cars is well known, as he was host of the national TV program “Behind the Wheel”.

The initial word from people who were in the studio audience for filming was that it was disappointing to see an exact copy of UK Top Gear with no obvious Australia specific features.

The Stig wears the same white race gear and helmet, lap times, couches centre stage, a celebrity interviewed after driving a reasonably priced car – nothing at all separated Top Gear Australia from the original BBC version apart from different presenters.

The comments by viewers on this blog post are mostly unhappy. I’m surprised people were so violently against the show. I thought it wasn’t fabulous but was OK. Remember people that you’re comparing Top Gear Australia with a $200000/$300000 per episode budget to Top Gear UK which has a practically unlimited budget because BBC resells it around the world and makes millions of pounds in profit.

Thanks to Tasmanian readers of this site Leigh Murphy & Steve O. who sent in photos of the Top Gear Australia team driving a Lamborghini, Porsche & Aston Martin in Tasmania. 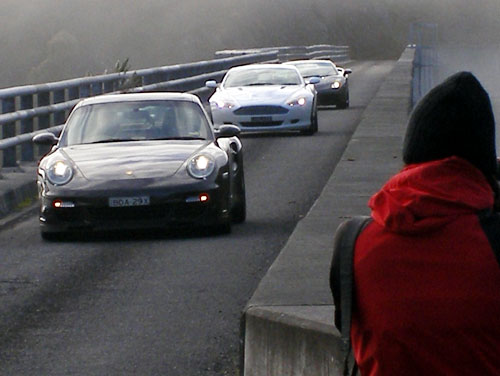 Allegedly the Aussie Stig is (are) Rally Driver Neal Bates and Rick Bates. They use both brothers in the show.

I’d never heard of Steve Pizatti but Warren Brown is a great choice, I loved his work in the ABC TV series Peking to Paris where they recreated the original race 100 years ago with 5 cars identical to the originals, ready to re-create motoring history.

Australia is the first country in the world to secure the rights to make a local version of the much loved show. “This is fantastic news for SBS, for Top Gear fans and for Australian audiences,” SBS director of content Matt Campbell said of the show that has become one of the BBC’s biggest worldwide hits.

Applications for Top Gear Australia presenters closed in February 2008. Expecting a few hundred applications SBS TV was shocked to receive over 4000. Advertisers have expressed extraordinary interest in the program and celebrities are already lining up to be apart of the shows “Star in a Reasonably Priced Car” segment.

On the application cut-off date SBS said in a press release that they:

would like to take this opportunity to thank everyone who got out their video cameras, and of course those of you who helped your friend or family member to apply, for your overwhelming and extremely entertaining applications.

The length entrants went to were extraordinary and applications, almost 4,000 of them, were funny, clever, imaginative and as requested, quintessentially Australian. Who knew the country had such an extraordinary pool of unearthed talent and we look forward to casting the new hosts of Top Gear Australia.

Top Gear’s manic and breathtaking test driving and brutal appraisals of the world’s most popular cars have made the show’s presenters Jeremy Clarkson, James May, Richard Hammond and The Stig TV legends.

The Australian version has local hosts and won’t simply replicate the original UK Top Gear series broadcast on the BBC. SBS plans to make a program that is uniquely and quintessentially Australian,” said Matt Campbell (SBS Director of Television and Online Content).

SBS has screened Top Gear since 2005 and will broadcast the series as long as the BBC keep making it.

An Australian version of the car lover’s magazine Top Gear was launched in June 2008with a multimillion-dollar advertising campaign by ACP who hoped it will sell up to 70,000 copies a month and reach a wider audience than their other motoring magazine, “Wheels”. The monthly magazine is targeted at males aged 25-49 and costs $7.95 from a news agent.

Content is claimed to be: “Motoring news and reviews written in an entertaining, witty, irreverent style that only Top Gear can do!” Lets see if it matches the marketing hyperbole

When Can I Watch Top Gear Australia?