The Chaser’s War on Everything will be missing from ABC TV in the first half of 2008.

Thu Sep 6, 2007 8:00pm: Eleven people from the ABC TV program The Chaser’s War on Everything were charged with offences under the new APEC legislation. Eight ABC cast and crew members and three hired drivers have been charged with entering a restricted area without justification.

The group was arrested after staging a fake motorcade through Sydney’s CBD and were stopped near the InterContinental Hotel where US President George W Bush is staying after going through 2 checkpoints with obviously fake ID. They were only stopped by security when Chas exited the car dressed as Osama bin Laden 🙂 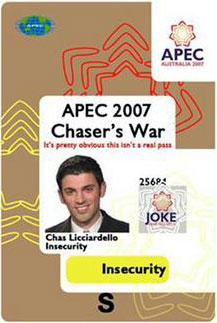 In the event of a federal election, The Chaser will present a series of election specials with segments including “Pollie Wants A Cracker” – where the Chaser team will ambush our politicians and offer them a giant oversize cracker which has a satirical message written on it.

Among the regular segments returning to The Chaser’s War on Everything in 2007 are:

Filmed in front of a studio audience, the Logie Award-winning team of both CNNNN and The Chaser Decides will be doing what they do best – confronting and lampooning key players from the world of politics, business, religion, media and culture. These signature Chaser ambushes will form the core of the new series – alongside news-of-the-week analysis, comedy sketches, and their uniquely irreverent field experiments such as:

The Chaser’s War on Everything will be tough, bloody and unforgiving. Don’t become the first casualty by not tuning in.

The Chaser’s War On Everything is filmed in front of a studio audience on Tuesday nights at the Sydney ABC studios in Harris St, Ultimo. When I attended the audience was let in at 6:40pm and let out at 7:50pm. This included time for audience warmup and a few retakes at the end to fix pronunciation errors. Note: because a large part of the show is pre-taped outside the studios, the audience spent a large part of the time watching these pre-taped segments on the studio monitors.

Tickets are free. Please be advised that the show is unlikely to be suitable for young children. Please contact the ABC production team to request tickets If you’re unable to make it, please advise the production team as there’s probably a waiting list!

53 Replies to “The Chasers War On Everything (ABC TV) Review”