With currencies and share / stockmarkets around the world crashing and ordinary people losing a lot of money I thought I might cheer you up by reviewing “Trading Places” and “The Bank” – 2 movies with a stockmarket / finance theme where the little guy wins in the end. 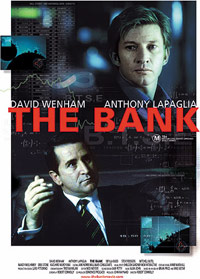 “The Bank” is an Australian movie that will provide catharsis for anyone wanting to see the mega-corporations of the world get their just desserts. Jim (David Wenham) is a gifted mathematician who swears he’s found the right combination of chaos theory and fractal geometry to allow him to predict the rise and fall of the stock market.

Ruthless Centabank CEO, Simon O’Reilly (Anthony LaPaglia) sees this as an opportunity to make a killing because Jim’s specially designed software promises to forecast financial market trends so accurately that its owner can make a fortune in a matter of hours, leaving millions to face financial ruin. Welcome to the world of The Bank, ripe with avarice and corruption, where O’Reilly and his ilk can thrive and honest Aussie battlers lose everything.

“inspires as much faith in banks as George Dubya Bush does in world peace.” – The Age Newspaper

“If you think the banks are bastards, you’ll buy a sheaf of tickets to The Bank, and give a few to your bank managers and his bosses so you can watch them squirm.” – Andrew Urban, Urban Cinefile

Trading Places differs from The Bank because it’s a comedy not a drama and was made 25 years ago whereas The Bank was made quite recently. However both deal with similar themes of greed, avarice and the callous treatment of ordinary people by the managers of powerful financial organisations.

The plot revolves around a one-dollar bet between the fabulously wealthy but morally bankrupt Duke brothers (Ralph Bellamy & Don Ameche) over an experiment in social darwinism to determine whether heredity or environment have the most influence on financial success.

They arrange for impoverished street hustler Billy Ray Valentine (Eddie Murphy) to be placed in the lap of luxury. Simultaneously, they strip wealthy Louis Winthorpe III (Dan Aykroyd) of his identity and wealth. When Billy Ray figures out that the brothers intend to send him back to his life of poverty once their experiment is complete, he seeks out Winthorpe, and together they plot their revenge on the Duke brothers by manipulating the market in frozen orange juice futures.

“Trading Places wants to be funny, but it also wants to tell us something about human nature and there are whole stretches when we forget it’s a comedy and get involved in the story. And it’s a great idea for a story: A white preppy snot and a black street hustler trade places, and learn new skills they never dreamed existed.” -Roger Ebert, Chicago Sun-Times

“Very funny, with Landis and Murphy at the top of their game.” – San Francisco Examiner

“One of the finest comedies of the early 1980’s has recently made its debut on DVD. We’re talking about Trading Places, an altogether hilarious concoction that features Dan Aykroyd at his strongest, Eddie Murphy at his freewheeling funniest, and director John Landis at the absolute top of his game” – efilmcritic.com

8 Replies to “The Bank and Trading Places – Movie Reviews”