Some movies are merely tolerable, others like are feel good movies which are fun to watch but don’t have much substance or long lasting impact. Stranger than Fiction is not a cookie cutter movie off the Hollywood production line, doesn’t have many flashy special effects, explosions or chase scenes but still manages to be more satisfying than other movies I’ve watched in the last year or two.

As the lead character Harold Crick, Will Ferrell shows the audience that like Jim Carrey he is capable of playing a serious dramatic role despite making his reputation with crude comedies. Dustin Hoffman plays a literature professor who helps Harold analyse the path his narrative is taking and Emma Thompson is great as the reclusive chain-smoking writer Karen Eifel who narrates Harold’s life as it occurs. 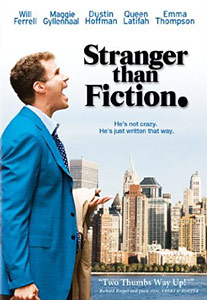 With some similarities to The Truman Show, Stranger Than Fiction examines the human condition, pokes fun at writers and “literary theory” about what constitutes a good ending and urges movie viewers to Carpe Diem (Seize the Day) and liven up their monotonous hum drum lives.

The movie begins with a voice over by the narrator :

One morning, a seemingly average and generally solitary IRS agent named Harold Crick begins to hear a female voice narrating his every action, thought and feeling in alarmingly precise detail. Harold’s carefully controlled life is turned upside down by this narration only he can hear, and when the voice declares that Harold Crick is facing imminent death, he realizes he must find out who is writing his story and persuade her to change the ending.

“Stranger Than Fiction is a meditation on life, art and romance, and on the kinds of responsibility we have. Such an uncommonly intelligent film does not often get made.”
Roger Ebert in the Chicago Sun-Times

“I really am not a fan of Will Ferrell. “Feral” as I call him. I just can’t stand him on screen. I thought he was wonderful in this. I just loved it, I loved this whole concept of art enriching life, and it’s done with wit and style. And he’s just beautiful.”
Margaret Pomeranz on ABC TV’s At The Movies

“Stranger than Fiction is an absolutely wonderful movie, a mainstream comedy with a mainstream star cast against the tide of his own dumbness, in a script that’s as clever and moving as it is funny and surprising. This is the first great movie of 2007 (at least in this country) and it stars Will Ferrell, for God’s sake. Where did this come from?”
Paul Byrnes in the SMH

One Reply to “Stranger Than Fiction (Movie and DVD Review)”