A few weeks ago my computers Antec power supply unit (PSU) failed. After a lot of research I bought a Silverstone Strider ST365 PSU for $AUS 53 and i’m reviewing it in this article.

The reason I bought it instead of just finding the cheapest power supply with the highest wattage rating was because I followed advice given to me by the OCAU PSU guide1:

The Power Supply Unit (PSU) is responsible for converting the (AC) mains power received from the wall socket into various DC voltages used by the components of a PC.

Computer systems need a good clean energy source. When purchasing a $3000 dollar top of the range system most people neglect to also put those extra bucks into a decent reliable energy source for their system.

No longer is the $20 ‘yumcha’ PSU that comes with a $60 case sufficient, as they are noisy and unreliable (often dying after a year or two’s use, taking out components with them), but more importantly are unsuited to powering modern computers due to a weak 12V rail, and don’t have the right connectors (24pin atx, pcie, sata etc) 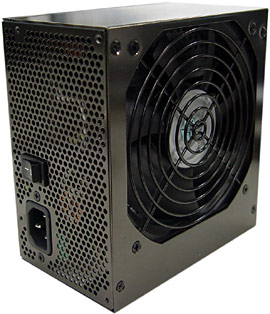 Note it has NO PCIE connector, but that doesnt matter for me because I have an AGP graphics card with no intention on upgrading to a PCIE graphics card. Therefore it could also be used in a home theatre PC with integrated video card.

The PSU being reviewed, the Silverstone ST365 (360w), is about the cheapest brand name 24pin PSU on the market. The cost was a mere $55, almost as cheap as pathetic generic units, so expectations weren’t super high

It is fairly clear that despite being a budget unit, this PSU is as capable of handling heavily overclocked systems as more expensive units, and provides evidence to counter the idea that you need a premium PSU to get the most out of your CPU /video card.

While the lack of a PCIE connector is disappointing, everything else about this unit was impressive