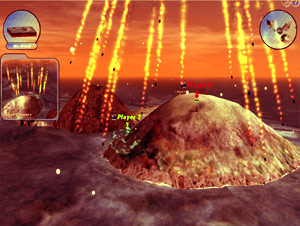 Scorched 3D is a FREE game based loosely (or actually quite heavily now) on the classic DOS game Scorched Earth “The Mother Of All Games”. Scorched 3D adds amongst other new features a 3D island environment and LAN and internet play. Scorched 3D is totally free and is available for both Microsoft Windows and Unix (Linux, FreeBSD, Mac OS X, Solaris etc.) operating systems.

You can pick up the game and begin playing very quickly. Then, when/if you are interested, you can poke in the dimmer recesses of the game and get into the strategy (or just ignore it altogether!).

At its lowest level, Scorched 3D is just an artillery game with two+ tanks taking turns to destroy opponents in an arena. Choose the angle, direction and power of each shot, launch your weapon, and try to blow up other tanks. That’s basically it.

But Scorched 3D can be a lot more complex than that, if you want it to be. You can earn money from successful battles and use it to invest in additional weapons and accessories.

You can play with up to twenty four other players at a time, mixing computer players with humans. There’s a variety of changing environmental conditions and terrains to be dealt with.

After the end of each round (which ends when everybody dies or there’s only one person left), you get to buy stuff using the prize money you won from previous matches.

“The venerable artillery-style slug-match gets a 3D update with Scorched3D, a very addictive and nicely rendered turn-based game. 5 Stars.” (Review of Scorched 3D by CNET Download.com)

“Take a concept as cool as Scorched Earth and run with it. What’s the first thing you think of? If you’re like most gamers, the answer is probably “modern graphics.” That’s the exact goal of Scorched 3D; it’s an almost-exact replica of Scorched Earth only with stunning 3D visuals.” (Review of Scorched 3D by FilePlanet)

“What makes Scorched 3D interesting are the little details. There are a variety of custom options to tinker with and after each round you can buy new missiles and defences with money pillaged from your enemies, adding a whole new level to the strategy.”
(Review of Scorched 3D by PC Magazine)