However that 4 star rating is strictly for outdoor adventuring types who’d rather jump off a cliff edge rather than walk along it, or big fans of Richard Roxburgh because he brings such a strong presence to the screen. For everyone else it’s a 3 star thriller movie to be enjoyed in the cool air conditioned comfort of a cinema for 109 minutes. 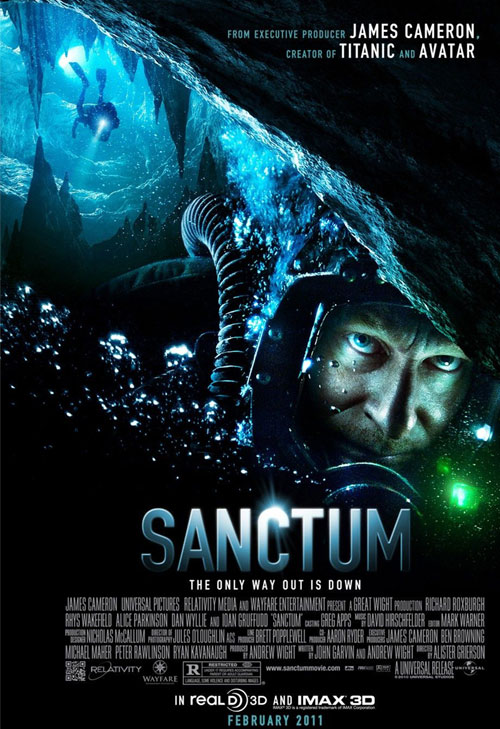 Caving is not a democracy. It’s an autocracy where the divemaster rules, not the customer and people who are offended by being given orders should not be involved. Either you’re safe or dead because reckless or panicky people are a liability.

Sanctum is based on the true story of co-writer Andrew Wight who once went cave diving and became trapped with fourteen other people in a cave for two days. Their entrance collapsed and they had to look for another way out. The movie is filmed entirely in 3D so I feared that 3D effects would be used needlessly like a lot of other recent movies.

Thankfully the 3D visuals were very effective and even when they weren’t as good 3D inherently makes the picture a bit more dark and murky which suited this plot. 3D looks like it’s well suited to a movie with lot’s of cave and tunnel scenes involving flowing water, rain and lots of scenes where the characters are advancing directly towards or away from the camera lens.

After watching Ioan Gruffudd in all the Hornblower telemovies hearing him faking an American accent in Sanctum felt wrong.

Some of the other film reviewers (details below) thought the dialogue could have been better written and I agree but some also thought there were too many “dinki di” Australian words and phrases and I disagree with that. There’s nothing wrong with a film using our language, why should every film have American or generic international English phrases in the dialogue.

As a side note the poem mentioned several times is “Kubla Khan”, by Samuel Taylor Coleridge and the relevant lines are:

In Xanadu did Kubla Khan
A stately pleasure-dome decree :
Where Alph, the sacred river, ran
Through caverns measureless to man
Down to a sunless sea

EDITOR: Parts of James Cameron’s latest movie ofering Sanctum have been filmed off Dunk Island and Mission Beach, areas which are currently being hammered by Cyclone Yasi on the same day the film is being released in Australia.

Other Reviews of Sanctum

Richard Roxburgh is one of Australia’s most gifted actors, and he makes the most of role totally out of his comfort zone as an obsessed caver with a son to whom his connection is almost nonexistent. This is the primary subplot and texture of the otherwise simplistic ‘will they escape’ scenario. It’s not really a plot. But the stunts are so well done, the dramatic loss of life so effectively and emotionally presented that we can’t really quibble.
– Andrew Urban (Urban Cinefile)

Sanctum is a pretty great underwater survivalist action movie, but with some of the most atrocious, overblown cheesy dialogue & crap accents
– Marc Fennell

#1 In every survival thriller there should be a life-or-death, sacrifice-oneself-or-a-loved-one decision. In SANCTUM there’s one every 10min.
#2 Stuck in a cave with cringe-worthy dialogue & narrative clichés, SANCTUM feels very long. (but not as long as Richard Roxburgh’s 3D nose).
#3 Apart from Roxburgh’s nose the 3D in SANCTUM was impressive, as was the technical craftsmanship. In many ways, it’s quite an accomplishment.
– Mathieu Ravier