I watched a screening of RED at North Sydney Oval’s Starlight Cinema using a press pass the other day and found it very enjoyable. A great way to spend a summer evening with a picnic dinner followed by a popcorn movie in the cool outdoor breeze. 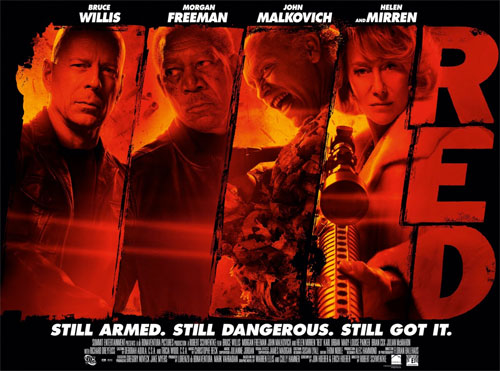 Frank Moses (Bruce Willis) is classified RED (Retired Extremely Dangerous) and the movie centres around his efforts to find out why his old employer the CIA is sending hit squads to execute him, while he drags along his new girlfriend Sarah (Mary-Louise Parker), who he fell in love with through call centre conversations about his government pension.

Some reviews of RED complain that the talents of great actors like Freeman, Malkovich and Mirren are wasted because the plot is too simple but these reviewers totally miss the point.

The plot is based loosely around a DC Comics series of the same name so of course it’s simple and one of the movie’s big strengths is getting to see Hollywood’s “senior citizens” in an all guns blazing action thriller where they kick the ass of younger actors.

After all doesn’t the idea of John Malkovich as a paranoid drug crazed ex-spook and Dame Helen Mirren as an assassin sharpshooter who’s proficient using a machine gun sound like great fun?

Summit Entertainment, the studio behind RED was so happy with the audience reaction and box office sales that it is investigating whether a sequel can be made. Fingers Crossed!

You can buy RED on DVD and Bluray from Amazon.com

Other reviews of RED

What makes RED more enjoyable than most is the wonderfully diverse cast – it’s great to see Helen Mirren handling firearms with such aplomb, or Ernest Borgnine, at the age of 93, cropping up as the keeper of the CIA filing system. With its self-deprecating humour, and a hilarious performance from Malkovich, the film – though it never makes the least bit of sense – is easy to take, and there are a few snappy lines of dialogue, too.
– David Stratton (ABC TV At The Movies)

Thrilling fistfights and shootouts are choreographed to within an inch of their life, with Willis, Urban and Mirren doing the heavy lifting in this department. Malkovich, however, gets to have the most fun as Marvin, a paranoiac former operative subjected to a few too many LSD experiments, leaving him on just the right side of crazy. All involved play to their (considerable) strengths, and the resulting understated comedy, action beats and general silliness is a strong match for the best geriatric adventures of a similar ilk. Expendable? Perhaps. Better RED than dead? Most definitely.
–Filmink

The thing to know about RED is that it is based on a DC comic book series created by Warren Ellis and Cully Hamner. Comic books are often not particularly comic — this film adaptation is. German-born Robert Schwentke does a fine job with a screenplay by brothers John and Eric Hoebner, and it’s realised, with some relish, by Mary-Louise Parker as Sarah in the standard role of plucky but admiring girl, and a cast of veterans.
– ABC Radio National Movie Time