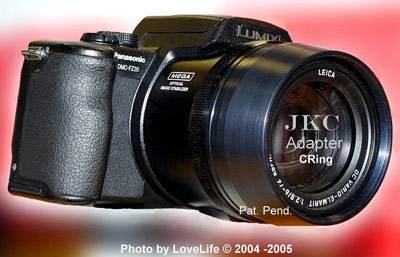 I recently purchased (July 2006) a 3rd Party 62mm Adapter for my Panasonic FZ20 from jk-consultants (JKC) in New York, USA (shown at right)

This increases my image quality because using the plastic Lens Hood which came with the FZ20 degraded the image qualityof photos because it shifted filters quite far away from the Leica front element.

Note that if you buy JKC’s adaptor then you will also need the corresponding sized lens cap that he sells and new smaller 62mm filters (the plastic FZ20 Lens Hood required 72mm filters) but thats OK because even including shipping from USA to Australia his prices were better than all the local stores that I checked.

The following are some useful reviews/resources for someone considering whether they should purchase this Digital camera:

In depth Review
“Announced at the end of July 2004, the DMC-FZ20 is the flagship model of the third generation of ‘super zoom’ cameras from electronics giant Panasonic, and is a direct replacement for the FZ10. Like its predecessors (and the simultaneously announced DMC-FZ3) the FZ20 sports a Leica-branded DC Vario-Elmarit zoom with a whopping 12x optical range (36-432mm equiv) and a constant F2.8 aperture. It also boasts a newly-improved optical image stabilisation system and the Venus II engine, which, according to Panasonic’s documentation, is now equivalent to shooting at 3 or 4 shutter speed steps faster” – continue reading review by www.dpreview.com

Samples gallery of photos taken by the Panasonic DMC-FZ20

Discussions by people in Camera forums about the Panasonic DMC-FZ20