What happens when you give 14 self-confessed nerds three months of intensive training and then have them play a leading national league team? 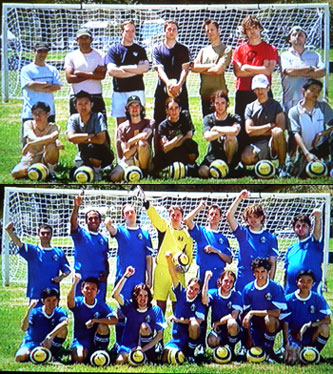 Nerds FC is a heart-warming, inspirational and often humorous journey of self-discovery and an uplifting family television experience.

Follow the Nerds over eight weekly episodes from Friday 14 April at 7.30 pm on SBS TV as they transform, with a little help from elite coach Andy Harper, from a bunch of fluorescent bookworms into a band-of-brothers who are prepared to lay their bodies on the line for the sake of the team – Nerds FC .

Between them, the Nerds have the knowledge to run the world. The Nerds have agile minds and perform mental gymnastics with ease. But it will take more than mind power to win a game of football against a leading national team.

Marika Deku has the well-earned title of Linguistics Nerd. He speaks seven languages and has even invented his own. But can he develop into a worthy No.11 and a capable and coordinated centre back ready to defend the goal and the honour of Nerds FC ?

John Truong plays No.8, right wing, and is an Astro Nerd. He is currently into his 4th year of a Bachelor of Mechatronic Space Engineering and Advanced Science at Sydney University. But can he outplay, outrun and outsmart his opposition to set up a winning goal?

Trent Apted (who was in my year group at Sydney Boys High) plays Goalie and is a Computer Nerd. When he’s not temporarily fed up with computer programming for his PhD at Sydney Uni, he programs for fun. PS He’s the player in yellow in the photo at left.

Over the series, the Nerds undergo tough physical training and become the fittest they have ever been. Mixed into their already busy schedule of learning rules and tactics are matches against surprising teams that will truly test the boys’ focus and strength of character – the Young Matildas and a hardened prison team.

Share the ups-and downs of this likeable group of boys as they become a close group of men who support each other, who share jokes based on shared experiences, and who, over the course of the series, become more confident in themselves and in their physical prowess. Oh, and they also learn to play football a bit.