This is an exclusive indepth report on what it’s like to being a lower house candidate for a major political party at State and Australian Federal elections in which I reveal what goes on behind the scenes from 6 months before the actual election day to several months afterwards. Hopefully this information will be useful to anyone else considering whether they should be a political candidate at elections.

Several months before the election is due to be held members from each political party will be trying to get pre-selected as the nominated party candidate for their local lower house electorate. 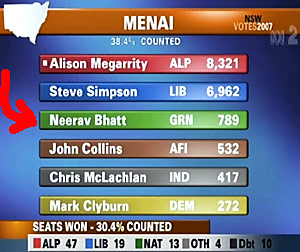 At other times pre-selection can be easy, especially if you’re approached by your party head office or local group to be their candidate or if you nominate for an electorate unopposed by anyone else from your political party.

These preselected party members along with independent candidates are the ones you have a choice of voting for on Election Day as your local representative in parliament.

Once preselected it’s recommended that you open a separate transaction bank account for the purposes of the election so you can accept donations into it and pay expenses from it. This will make post-election paperwork much easier.

To run even a small campaign with some pamphlets promoting your policies put into letterboxes by volunteers, a few posters displayed in prominent areas and how to vote cards printed for handing out on election day will cost at least $2000.

Party candidates from the big parties (Labor/Liberal/National) will often spend tens of $1000’s on advertising on TV, newspapers, radio and now on the Internet as well as paying Australia post to bombard households in their electorate with pamphlets about their policies.

Their are several sources for these funds including individual donations, self funding, corporate donations, your parties marketing budget.

The major parties will often accept grubby donations from large corporations and organisations in exchange for influence on policies to the advantage of the corporates and the disadvantage of individual voters and small business.

More details can be found at Democracy for Sale

Now in conjunction with your parties media officer you have to prepare:

These should be kept handy because your local papers and news outlets are likely to call or email you and ask for them at very short notice to use in their election coverage. 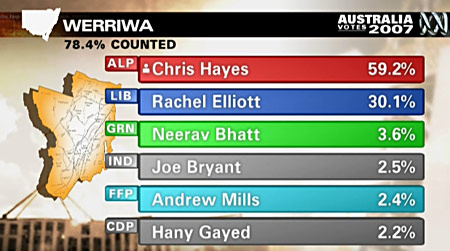 Publicise your contact details to ensure people in your area know how to volunteer to help out your campaign and ask your local party group and state/federal party office for lists of volunteers who have previously helped out in your electorate area.

Volunteers are key to electoral success especially if you don’t have the funding to pay for Australia post to letterbox your pamphlets and it is said that on polling day candidates who have volunteers handing out how to vote cards at each booth can get at least 1% more votes.

Make sure you make it clear to all your volunteers how much you value the amount of their time they’ve given to your campaign because without them you wouldn’t have got very far.

Typically you’ll have less than 2 weeks before the cut-off date so make sure your nomination form is lodged well in time.

You will get this deposit refunded if you receive at least 4% of the total number of first preference votes polled for your electorate.

Step 6 – Once the Election is called… Publicise your policies

If you or your party has lots of funds you’ll be able to promote your policies across radio, TV networks, Internet ads and major newspapers.

Also you’re likely to receive surveys from all manner of public interest, business and other pressure groups to answer questions about your policies and how they will effect their membership.

You will also have to decide who your preferences will go to (if anyone). This is a complicated topic and further information can be found at Australian politics – Preferences & Two-Party-Preferred Votes .

Step 8 – On Election Day and a Few Days After

Make sure your volunteers are well organised and shifts are rostered at all possible polling booths to hand out your how to vote cards and answevoter questions about party policies.

Standing outside a polling booth can be quite tiring so make sure people get plenty of breaks during quiet times if they’re at the same booth all day or have them swap over with another volunteer around lunchtime.

As the candidate you will of course have to hand out how to votes for yourself!

Make sure you and all your polling booth volunteers have at a minimum:

As the end of the day approaches go around to all the polling booths to thank volunteers, take back posters, unused pamphlets any rubbish etc

Once you reach home or your campaign party start watching ABC TV election coverage and make sure you regularly check how you’ve done on the AEC website as votes start getting counted.

It’s usually obvious which party has won government by 9pm but counting/recounting can go on for several days or even weeks for seats which are closely fought.

After the election if you’ve received more than 4% of 1st preference votes than you are eligible for public funding:

If you’re interested in Australian politics and elections than I’ve collected a list of websites which cover those issues.

I hope this article is of use to anyone considering being a candidate at Federal or State Elections and to people who wonder how the system works. If I’ve made a mistake anywhere in this article or you can add further information please tell me by making comment

Related article: read about my motivations for being a political candidate at: How One Person Can Make a Difference