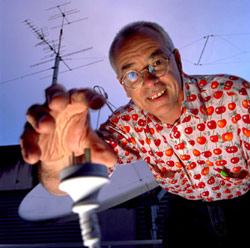 Still not sure if you want to watch? What if I told you that there are cameos by the who’s who of British comedy: David Williams (Little Britain), Bill Bailey (Black Books), John Simm (Life on Mars), Mark Gatiss and Reece Shearsmith of the League of Gentlemen, Ricky Gervais (The Office) …

Spaced is a BAFTA-nominated channel 4 sitcom written by and starring Simon Pegg and Jessica Stevenson. The series plots the lives of Tim (Simon Pegg) and Daisy (Jessica Stevenson) as well as those of their friends.

Tim (Simon Pegg)Tim (Simon Pegg) is a twentysomething, underachieving comic book store (assistant) manager with a morbid fear of dogs and Daisy (Jessica Stevenson) is a would-be journalist who is yet to get an article printed.
To get their flat, they had to pose as a professional ‘yuppie’ couple and their landlady, Marsha (Julia Deakin), is still to realise their deceit.

Neighbour Brian (Mark Heap) is a conceptual artist and more than a bit… well, wierd. Daisy’s best friend Twist occassionally pops in to their flat and is currently flirting with Brian.

Mike (Nick Frost)Tim’s best friend Mike is an enthusiastic member of many outdoor activity organisations including the territorial army, although they will never make up for the disappointment of not being able to be in the “real army”.
– source: Spaced Out

Top Gear season 9 was supposed to be on SBS Monday nights in November ‘07, now its starting on January 7th 2008 at 7:30pm with the Top Gear Polar Special where the boys race each other across approximately 650 kilometres of treacherous frozen ocean and fields of giant ice boulders to the Magnetic North Pole.

Some American Late-Night Shows are back

American talk shows which have been off air for the last 2 months because of the writer’s strike are due to restart with different “writer-free” formats. Jay Leno and Conan Conan O’Brien return on January 2nd, Jon Stewart and Stephen Colbert return on January 7th.

How are they going to do when they return during the writers’ strike, without writers’ help? “It’s going to be hard,” said Jeff Ross, executive producer of “Late Night With Conan O’Brien. “We have 12 writers here normally to come up with material every day doing a show five days a week. So there’s no question it will be hard.”

UPDATED 30th DEC ’07: Late night talk show host David Letterman has struck a deal with striking television writers, paving the way for a return of his show to the airwaves after a two month break. It’s likely that new episodes of “The Late Show with David Letterman” will start being shown in Australia on CH10 on January 4th ’08.
– source AFP (via Google News)

Podcasting content from the ABC has been popular in 2007, with video podcast (vodcast) of The Chaser’s War on Everything the most popular on the iTunes list of top Podcasts with 9 million downloads this year.

The ABC serves 15.8 million vodcast downloads of predominantly whole television shows. Other popular vodcasts include JTV and Summer Heights High, but neither come close to the Chaser’s downloads.

Audio podcasts for the ABC are also popular, with an average on 2.7 million downloads a month. Over 50% of which are downloaded outside of Australia. A Radio Australia program, English for Tourism is the ABC’s most popular audio podcast.
– Source: Sydney Morning herald

Broadband, Communications and Digital Economy minister Stephen Conroy has announced there would be a firm end date for the transmission of television in the old analogue signal form – still used by the majority of households. He ordered that free-to-air television be broadcast only in a digital signal in all major cities by 2009 with a final switch-over across the nation by 2013.

Read more at the Sydney Morning Herald and The Australian newspapers