Business people who send and receive lots of emails prefer Research in Motion (RIM) Blackberry phones. I stated this in my Ignite Sydney 2 talk about the Evolution of Mobile Phones in early 2009 and most people would agree with my statement – but will it be the case in the future? 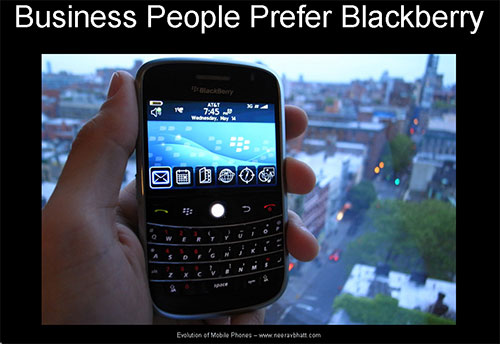 Blackberry’s benefits are mostly beneath the surface of the actual hardware device and these benefits are “needs” like efficiency, security, reliability and speed rather than “wants” such as a great looking design, large touch screen and the coolest new features and services regardless of whether they’re 100% polished.

Blackberry phones like the Bold 9700 lack the Glamour of iPhone and geek appeal of Android but prove a worthy contender as an efficient, multi-tasking communications workhorse which keeps powering on long after iPhone & Android batteries go flat.

The Blackberry hardware+services solution offers a lot of features that other handsets don’t like:

Blackberry’s strength is its operating system and services but it needs to better explain it’s hero features and inject some spirit and attractiveness into its handsets (from which makes around 4/5ths of its revenue) to stop people defecting to other smartphone platforms.

That said, some people who switch to another smartphone like the iPhone may well return to Blackberry eg: Why I prefer Blackberry over iPhone for business when they find out how many features they took for granted are Blackberry specific.

Personally as a smartphone reviewer who has tested many handsets including Google Android, Apple iPhone, RIM Blackberry and Nokia Symbian I think RIM’s Blackberry phones could hold their market share if they can provide a broader range of devices which include their trademark usefullness “needs” as well as “wants” like the iPhone’s great looking design and large screens as used in Android phones like the Google Nexus One.