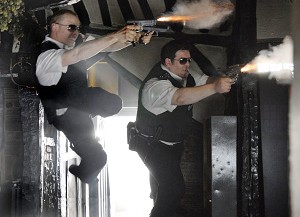 The main character in Hot Fuzz, Nicholas Angel, a sergeant in the London Met (Metropolitan Police Service) is played by Simon Pegg.

Fans of British TV will recognise him from starring roles in “Spaced” and “Big Train”, guest appearances in episodes of Black Books and The New Dr Who as well as his previous hit movie “Shaun of the Dead”.

Sergeant Angel is a copper who does everything by the book, winning countless awards and eventually shows up his colleagues and superiors so much that they arrange for him to be “promoted” to a position in the sleepy country town of Sanford

Angel is frustrated by the Chief Inspector’s approach of turning a blind eye to offences like under age drinking and speeding just to keep official crime statistics low and is trying to instigate his partner Danny into following all the rules and regulations when they uncover a series of gruesome “accidents”.