You know it’s a Family Guy spoof of Star Wars when the opening titles include an animated elephant scampering across the screen to the tune of the Victory March. Fans of Fox’s ever-popular Family Guy franchise have come to expect it to deliver below the belt humour and controversy and this movie delivers in spades. 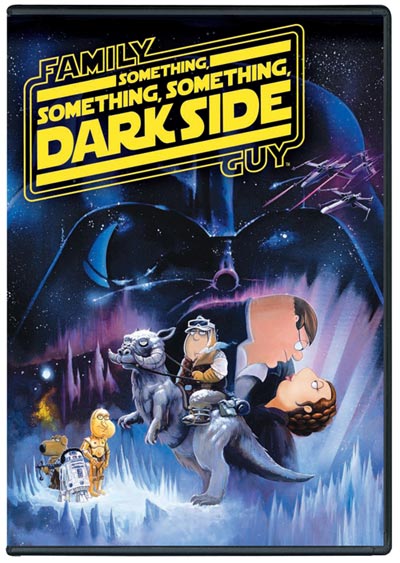 I watched “The farce” begin at the Fox Studios exclusive media preview screening. The opening titles featured an animated elephant that apparently cost 58 thousand dollars to produce and a pot shot at Twentieth Century Fox for canceling Family Guy.

The opening scenes are set on the remote ice world of Hoth where Chris Griffin (Luke Skywalker) has a vision of his late mentor Obi-Wan Kenobi (Herbert) telling him to go to the Dagobah system to learn the Force under Yoda (Carl).

However, before Chris gets the chance, Cookie Monster from Sesame Street makes a surprise (short) appearance and suffers a bloody demise.

Meantime, Peter Griffin (Han Solo) takes a breather from his clumsy attempts at helping the rebellion fight the Dark Side by skiing with characters from a Wrigleys chewing gum commercial.

True to form, Peter mouths off at Lois Griffin (Leia), his nasal small screen wife, when she nags him and delivers the usual “Shut up Meg” line when his daughter complains why she never gets any lines.

Stewie Griffin (Darth Vader) once again shines in his own diminutive, but devilish way, strangling anyone that comes in his way.

Stewie tries to lure Chris to the Dark Side by saying it would be “Just two dudes … ruling the planet”.

Whilst leading the assault on the rebellion, Stewie has to contend with constant complaining from his Spanish cleaning lady because he doesn’t buy her Windex (window cleaning spray) to clean the Imperial Starfleet properly.

The movie comes to an end with Chris receiving a letter from “Doc”, a reference to the cult classic movie, Back to the Future and the promise: “To Be Concluded”.