Despicable Me is the first animated CGI film from Universal Pictures / Illumination Entertainment and in that light is quite decent for a first effort. I attended a media preview of Despicable Me 3D and my verdict was a solid 3 stars 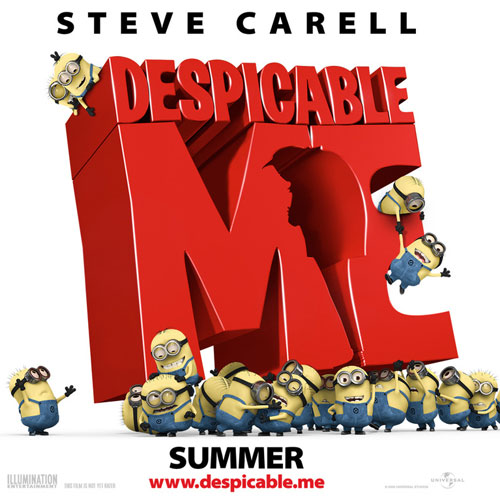 While the movie is certainly fun it relies on Looney Tunes visual stunts rather than any real plot. Note to Universal: it takes time and experience to be as good at creating animated movies as Pixar. By all means strive for greatness but not so much that the movie looks like its trying too hard.

Luckily the yellow minion creatures & 3 cute little girls steal the show with a solid supporting role by Russel Brand as the voice of inventor Dr Nefario. 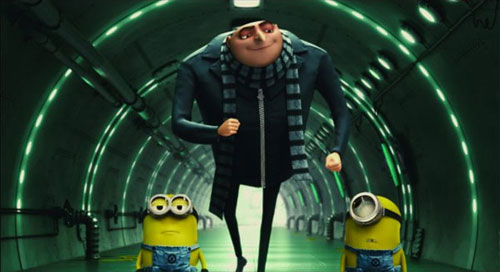 The story revolves around Gru (voiced by Steve Carell) who wants to be the world’s greatest villain.

However stealing miniature replicas of the Eiffel Tower and Statue of Liberty from Las Vegas are hardly huge feats so he decides to pursue his lifelong dream to become an astronaut, visit the moon and hold it ransom. Gru adopts 3 little orphan girls, planning to use them to achieve this objective but becoming a father changes him in ways he didn’t expect.

I watched the movie in 3D but the 3D effects were so underutilised most of the time that the radio 2UE movie reviewer sitting next to me agreed that 2D without the glasses would have been just as good. I think the colours would also have looked better in 2D because there is an unavoidable 30% colour loss when viewing 3D movies.

Despicable Me will rake in money at the film box office in Australia when it opens on September 9th because kids will *love* it.

A sequel to Despicable Me is already under way, if it focuses more on the exploits of the minions it could be an even bigger box office hit than the original.

Other Reviews of Despicable Me

With Despicable Me, though, it becomes more and more apparent that story was often shaped around how to best deliver a visual gag or how to showcase a joke. This gives the film a very goal-specific mindset that results in plenty of well-timed laughs while also sacrificing the illusion of spontaneity that can make one forget that they’re watching a film that is, by definition of its medium, totally artificial.
– Cinematical

“Despicable Me” lacks a franchise to ride into town on, but it may establish one. I’m not sure how Gru can think up anything more sensational than stealing the moon, but I’m sure Dr. Nefario is working on that as we speak. The film is funny, energetic, teeth-gnashingly venomous and animated with an eye to exploiting the 3-D process with such sure-fire techniques as a visit to an amusement park.

The sad thing, I am forced to report, is that the 3-D process produces a picture more dim than it should be. “Despicable Me” is technically competent and nowhere near the visual disaster that is “The Last Airbender,” but take my word for it: Try to find it in 2-D. Or, if you see it in 3-D, check out the trailers online to see how bright and cheery it would look in 2-D. How can people deceive themselves that 3-D is worth paying extra for?
– Roger Ebert (Chicago Sun Times)

The few moments of genuine visual or verbal wit – a bit of delicate minion slapstick that recalls the antics of Scrat in the “Ice Age” movies; a line reading that showcases Mr. Carell’s unparalleled deadpan – only highlight the paucity of real originality or artistic confidence. So much is going on in this movie that, while there’s nothing worth despising, there’s not much to remember either
– New York Times