Last week I watched a media preview IMAX Sydney screening of Sir David Attenborough’s 1st 3D documentary. Flying Monsters 3D tells the story of winged lizards called Pterosaurs (also known as Pterodactyls). They were the first backbone animals to fly over 200 million years ago and dominated the skies for the next 150 million years.

Applying the same state-of-the-art 3D CGI technology that was used in “Avatar,” “Flying Monsters” also employs pioneering scientific techniques that reveal new details about pterosaurs. From discovering pterosaur embryos that show they might have flown from birth to figuring out how a creature the size of a giraffe could possibly fly, “Flying Monsters” will resolve mysteries that have intrigued scientists for more than two centuries.

“3D is a wonderful way of seeing the world as the pterosaurs did,” said Attenborough. “Pterosaurs are the most unlikely of creatures, but they dominated the skies for millions of years, and now this film will enable us to fly in 3D with them, the largest flying creatures the world has ever known.”

The 45 minute documentary follows Pterosaurs over millions of years as they diversified into different sizes, specialized in hunting different types of food and grew shorter tails which made it easier to walk on the ground.

Highlights included 3D animations used to put fossil bones together and animate a wireframe Pterosaur. CGI (Computer Generated Imagery) of Quetzalcoatlus (the largest animal ever to fly) was also used to good effect, combined with real life footage of Sir David Attenborough flying in a glider to show how huge this Pterosaur was in size and wingspan.

Flying Monsters 3D is a bit more serious and contains more science content than the average IMAX documentary so it is unlikely to keep kids of primary school age interested for the full 45 minutes. Teenagers and Adults will find it an informative and entertaining experience. 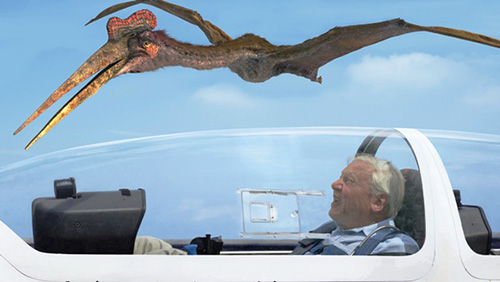 You can learn more about Pterosaurs on the National Geographic and BBC websites.

By coincidence I was reading a book written by Sir Arthur Conan Doyle called The Lost World just before I received the media preview invite for Flying Monsters 3D .

Nearly 60 years after Conan Doyle published the story of this imaginary expedition, life imitated art: Pterosaur remains were actually discovered on the Araripe Plateau in northeastern Brazil. Fossils of pterosaurs that probably looked very much like Conan Doyle’s prehistoric creature—with wingspans of 20 feet (6 meters) and jaws full of piercing teeth—continue to be found there today.
– NatGeo

The book is out of copyright so it can be read for free if you have an ebook reader such as Kindle or Kobo, on Project Gutenberg copy and also Google Books.