GUEST ARTICLE: Damages season three picks up on the recent global financial crisis with Patty Hewes and new named Partner Tom Shayes pushing the limits of the law and ethics to uncover the hidden fortunes of Ponzi finance tycoon Louis Tobin (Len Cariou), a character modeled on the recent real life Ponzi scheme by Bernie Madoff, thought to be the biggest ever at an estimated $US 50 billion dollars. 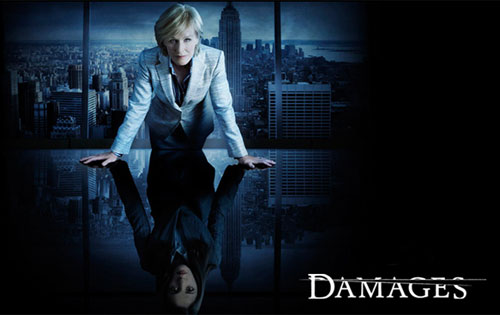 Raising the stakes yet again, season three of this multi-Emmy award winning series pits top gun attorney Patty Hewes (Glenn Close) and Tom Shayes (Tate Donovan) in a legal battle against a corporate high flyer determined to escape justice, no matter how dire the consequences are to him or those surrounding the case.

Similar to season one and two, Patty is up against a corporate high flyer and his attorney Leonard Winstone (Martin Short) who has a hidden past in a battle to recover the crippling losses felt by the victims of Tobin’s massive investment fraud.

As fans of the show have come to expect, no matter how much Ellen Parsons (Rose Byrne) loathes Patty for tearing her life apart when she was a wide eyed Associate at her law firm, she can’t help but admire the way her mentor and former boss wields influence to get some form of justice for those who have nothing.

Despite having moved on from Hewes and Associates to work for the District Attorney’s office in New York, Ellen is slowly lured into the web of legal proceedings surrounding Tobin and becomes entangled in poisonous and cold hearted mind games in what seems to be a largely failed attempt to unshackle herself from Patty’s pervasive control.

Damages season three will keep audiences hanging from the first episode with the effective use of flash-forward sequences which serve to unravel the sinister end that meets one of the shows key protagonists.

If you’re a fan of season one and two you may find the main themes of Patty versus the corporate fraudster, Patty’s destructive power plays and Patty’s ‘whatever it takes’ to win mentality a bit repetitive.

But for many, that’s the appeal of the Damages franchise – there’s just no other show that blends the big issues of corruption, ethics and justice with the same depth of plot and character development.

Other Reviews of Damages Season 3

The good folks behind FX’s “Damages” have apparently never heard of the sophomore slump. Opening with a bang, literally, the third season of this gravity-defying balancing act of a show promises to be the best one yet.

Jumping at the chance to fictionalize Bernie Madoff, here thinly disguised as Ponzi-architect Louis Tobin (Len Cariou), creators Todd Kessler, Glenn Kessler and Daniel Zelman offer us the mouth-watering opportunity to see what would happen if our gal Patty could get to the bottom of things, all in the name of the defrauded masses: murder and mayhem, of course, presented in the show’s signature and still tantalizing time-warped bits and carried out by yet another killer ensemble.
– LA Times

While the second season of “Damages” built and improved upon the first, because of the loose ends that were tied up, the third flight is forced to undergo a reboot — and does so quite effectively. Incorporating both a clearly Bernie Madoff-inspired financial scandal and a murder mystery, there’s a “Law & Order”-like “ripped from the headlines” quality to the festivities, albeit serialized, elongated and employing the FX show’s demanding time-bending formula. Any way you slice it, this is big-brain TV — the kind of program that must be watched with close attention paid to the small details.
– Variety

“Damages” always excels at unconventional casting, from Ted Danson as the wily season one villain, Arthur Frobisher, to “Saturday Night Live” regular Darrell Hammond as a mysterious baddie last year. The savvy casting continues this year with Martin Short as an attorney for the corrupt Tobin family.
…
Although the new season of “Damages” kicks off a new mystery, the series retains its trademark flash forwards that signal murders and/or deceits yet to be revealed. It’s one of the show’s more operatic touches but this time the revelation, a fantastic and personal driver for stories, feels less like an attempt to manipulate the audience and more rooted in the plausible.
– Pittsburgh Post-Gazette