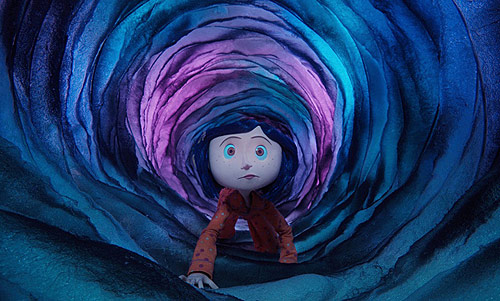 Asking questions like “which father would you rather?” and “which mom is more fun?” the underlying lesson of the movie to all of us is “be careful what you wish for”.

Adapted from Neil Gaiman’s children’s novel, the plot centres around the adventures of a young girl, “Coraline” who moves to a new home with her writer parents and feels they don’t care about her.

Coraline premiered in Australia as part of the Sydney Film Festival and was introduced by Teri Hatcher in person who described it as “a little bit scary, but the kind of subject matter that I think you can talk about with children .. Coraline is a great hero. I think she is a great role model for young girls.”

The visuals were great especially in scenes where Coraline visits “the other world” and reminiscent of Selick’s previous work in “The Nightmare Before Christmas”.

I shall let these visuals do their work in convincing you to watch the movie by encouraging you to view the slideshow below:

“Terrifying and beautiful, believable and fantastical, this is one of the best children’s films in years and Selick’s finest – better even than The Nightmare Before Christmas.”

“Adults leaving screenings of Coraline have been overheard fretting about how scary it is – and they’re right: it’s terrifying. Children leaving the cinemas, though, have just been bouncing and laughing. Strange, perhaps, but then, this is a strange film. As creepy as it is charming, as bizarre as it is beautiful, this is a true horror movie, but also a warm, brightly coloured children’s fairy tale about the magic behind the everyday.”

“And don’t forget, children are more resilient than we think. The Wizard Of Oz’s flying monkeys, the set-up of A Little Princess or the Child Catcher in Chitty Chitty Bang Bang are all terrifying at the right age, but it’s rare we remain traumatised by the encounter. Instead, the sight of a young protagonist defeating the forces ranged against him/her by an adult world is one that empowers, leaving kids not cowed but exhilarated. ”
– Empire Magazine

“It’s not really suitable for younger children but their elder brothers and sisters will be fiendishly entranced by the best children’s movie this year. Naysayers can button it”
– Sky Movies