From the mid 70’s to late 90’s Gary Larson drew over 4000 single panel comics in the Far Side series.

It’s been a long time since he drew any new cartoons so why are his cartoons still regularly seen in calendars, birthday cards, stuck to refrigerators, desks and office walls around the world?

One reason for The Far Side’s popularity could be the combination of black humour (death and disaster were common motifs) and the attribution of human characteristics to insects, snakes and various animals including farm yard animals like Cows.

The mammoth “Complete Far Side 1980-1994 (2 vol set) (Hardcover)” contains every single Far Side cartoon (4,081 to be exact), including more than 1,100 that have never been published in a book. The cheapest place to buy it is Amazon.com 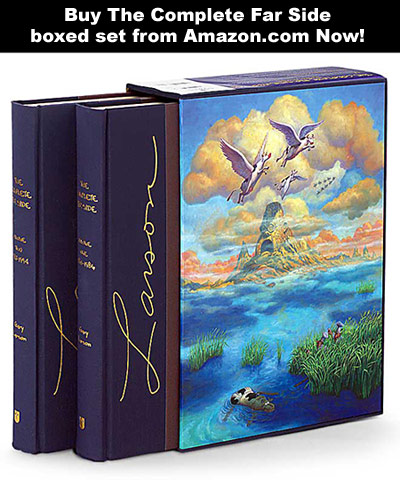 Upon his retirement in 1995 the Buffalo News “Nature Watch” column asked scientists around the world what their favourite Far Side comics were:

Favorites crossed specialties. Not only paleontologists cited the three most popular, all involving dinosaurs:

Many runners-up were specific to disciplines.

These films take audiences on a strange and twisted journey through the unique landscape of the comically scientific and strangely ironic musings of Gary Larson. Long-time Far Side fans will recognize their favorites and newcomers to Larson’s land of The Far Side are sure to find someone, or something, to love.

Tales I, the Grand Prix winner at the 1995 Annecy International Animated Film Festival and official selection of the 1995 Telluride Film Festival, was described as “Unearthly and wonderful” in TIME magazine’s Top 10 List for Best Television of 1994 and The New York Times said, “Mr. Larson’s …vision defies neat categories. Sinister … and perfect.”
…
The films are an animated collection of vignettes (12 in Tales I and 16 in Tales II), each featuring its own storyline and panoply of Far Side characters, including mad farmer scientists, zombies at a Dead Ranch, time machines, swamp fairies, partying amoebae, devious zoo inhabitants, beer-guzzling hunters, beer-guzzling aliens, dog soldiers, insolent cats, a vacationing Grim Reaper, and of course, cows.

I actually liked “Tales From The Far Side II” (45min) even better with its fantastic idea of following the disasters which occur around personification of death while he enjoys his vacation, however as far as I can tell it’s not available on any video sharing websites.

On an interesting side note: Gary Larson threatens his fans with cease and desist letters if they show even 1 of his comics on their website, even if their article is about how much they love Far Side and how other people should check it out.

15 Replies to “Classic Black Comedy: The Far Side Comics by Gary Larson”