I just left Dendy Opera Quays where I watched “Chasing Birds”, a Sydney Film Festival 2008 selection following the antics of 3 teams of keen bird watchers – the Hunter Thickheads, the Wacked Out Woodswallows and the Hunter Home Brewers – as they competed in the 2003 annual NSW ‘Twitchathon’.

The directors Greg Woodland and Gina Twyble chose to film the competition because they were interested in the highly competitive & obsessive sub-culture of birdwatchers and twitchers. 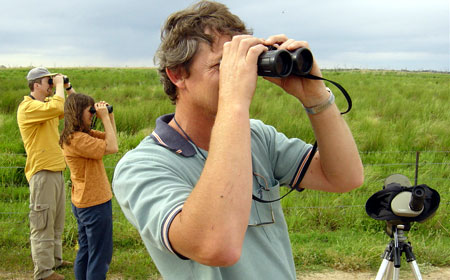 The aim of the Twitchathon is to spot as many birds as possible over 24 hours. The best tactic is to cover as many habitats as possible, so the teams travel huge distances in their 4WD’s, dashing in and out of rainforest, woodland and marshes.

The film crew – which included 12 of Australia’s top cinematographers and sound recordists – must be congratulated on their achievement: keeping up with the dashing spotters, without scaring off the birds

The tactics and rules of the Twitchathon reminded me of the sport of Rogaining.

Rogaining involves long distance cross-country navigation by teams of people on foot and the objective is to collect the highest score by finding checkpoints within a set time limit. The championship rogaine is a continuous twenty four hour event. Teamwork, endurance, strategy and map reading are features of the sport.

While I’ve never participated in organised bird watching clubs, I’m a keen wildlife photographer as you can see by my photos of a Rainbow Bee Eater and Rainbow Lorikeet that I’ve included in this article.