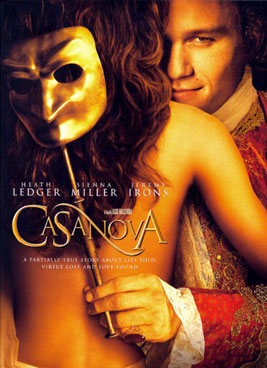 I watched Casanova in early March 2006. At the time the other feature films showing at the movie theatres were either too serious with themes of war and violence eg: Syriana and Lord of War or too boring like Capote

Casanova was the only one showing that made no pretense of taking itself seriously, it was clearly meant to be a bit of light hearted entertainment with great costumes and visuals .. however some critics didn’t seem to grasp this:

“…silly…an almost total waste of talent and money. The color and settings are beautiful and sumptuous… (but) this is brain candy, a trifle…entirely without substance.” – tonymedley.com

“Lasse Hallstrom’s colorful, lavishly costumed romantic comedy reduces 18th-century Europe’s most notorious cad to a plot device, forced to jump through so many narrative hoops it’s impossible to keep up and even harder to care.” – Tyler Morning Telegraph (Texas)

“Few pictures in recent memory have worked as laboriously as Lasse Hallstrom’s new romantic farce to be a featherweight lark.” – Newsday

However other critics realised that it was only meant to be an amusing way to pass 2 hours and it achieved this in spades:

“So this is not a film to be taken obviously at all seriously. It’s just a very light-hearted film. It makes Venice look wonderful. The acting is impeccable, people like Oliver Platt and Lena Olin, and Omid Djalili, he’s, as you say, superb. 4/5 Stars” – David Stratton, ABC’s At the Movies

“A handsome chunk of widescreen entertainment that’s as nimble as its rakish hero.” – Variety

“Is it Oscar bait? Not in the least. But it’s a great date flick and perfect for a time full of all those ‘serious’ films.” – CNN.com

Casanova has now been released on DVD so you can rent/buy it and watch it at home to judge which group of critics were right.

Heath Ledger, stars in the scandalously funny adventure Casanova. After a lifetime of women falling head over heels in love with him, the world’s legendary ladies’ man (Ledger) meets the love of his life – the one woman who thinks he’s a total heel. Comic chaos ensues in a hilarious whirl of misadventures, disguises, and mistaken identities as the love-struck Casanova tries to win the heart of the fiery feminist who wants nothing to do with the man she thinks he is.
– Marketing synopsis at http://video.movies.go.com/casanova/